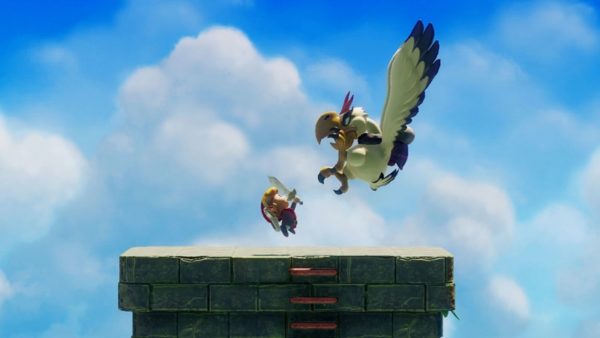 The bosses we will be covering today are Moldorm, Genie and Hinox.  All of these bosses are tough to deal with but can be defeated with sheer willpower and determination.

Moldorm will be the first boss you will face in the game. Moldorm is a worm type boss that moves around the whole stage trying to attack you. The boss will appear in the latter part of the Tail Cave dungeon. The boss’s whole body is invulnerable except for its red glowing tail. At times the worm will move around different corners of the map and it will expose its tail.

You can attack the tail with your sword. Once you attack its tail it will lose it’s cool and go into rage mode. Its speed will increase and attacking it will become more difficult. Just try to avoid its attacks and it will soon go back to its original form. Keep attacking its tail and dodging in its rage mode. You can also use Roc’s Feather to leap over it. At some point, it will enter rage mode for a longer period.

Attacking its tail in this form is hard because it is very nimble but it can still be attacked. Keep in mind not to go into the far corners as you will fall down into the pit below. Inside the pit go right then up to come back to the boss door and restart the battle. Once the boss gets attacked many times in the tail it will be defeated. You will get the Heart Container, which increases health, for defeating the boss. Head to the room to the north to get the Full Moon Cello.

Genie will appear at the end of the Bottle Grotto dungeon. The boss’s appearance is of a genie but it will go inside its bottle in the first stage. In the first stage, the Genie will attack you by throwing a fireball at you. Using the shield to block is useless instead try to dodge them as it is way easier. After these attacks, it will go inside its bottle.

Strike the bottle with your sword so that the bottle loses it’s balance and falls over. Once the bottle falls just pick it up and throw it at the wall. This will not do damage to the genie but to the bottle. He will repeat this a few times but you can keep lobbing the bottle at the wall. At some point, the bottle will break the second stage will begin.

In the second stage, the Genie will split into two. Both will be in a ghostly phase and will circle the stage. After some time one of them will materialize and throw a huge fireball at you. Avoid the fireball by dodging and strike the Genie with your sword as it pushes towards you. Repeat this over and over again and he will fall. Defeating him will give you the Heart Container. Head to the next room to get the Conch Horn.

The Hinox boss is a mini-boss who appears in the Bottle Grotto dungeon. He is a simple boss and has two moves. He will either throw a bomb at you or grab you. The bomb can be easily dodged sideways but the real trouble is the grab. If you get caught in it you take a lot of damage.

During the grab, he will throw you down the cracked tiles. You will lose little health but can continue dealing with him. The main tip against this boss to keep your distance and be patient. If he missed his grab he will wide open for attacks and you can defeat him easily.

We will keep this Zelda: Link’s Awakening Bosses guide updated by added more bosses. In the meantime, you can check out our guides on trading sequence and fishing.