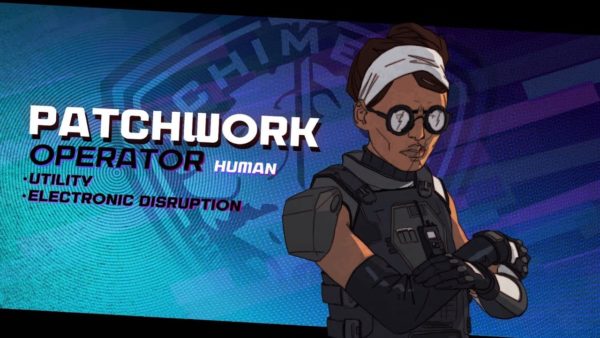 Patchwork is an Operator class human agent in XCOM Chimera Squad. This agent starts out with an Assault rifle and specializes in Utility, and electronic disruption. The following are the base stats for Shelter.

Patchwork has a unique set of abilities that players can use to their advantage. The following are all of the Patchwork’s abilities in the game along with their function and how to unlock them.

Chaining Jolt
With this ability, Patchwork sends the Gremlin to an enemy to deliver a jolt which also chains to nearby enemies. This ability is most effective against robotic enemies.

Hack Door
At the start of the breach, Patchwork hacks open the door.

Combat Scanners
When Patchwork uses the Combat Scanners ability, Gremlin scans the entire room and applies holo targeting on al enemies. This increases the squad accuracy by 15% against the marked enemies.

This ability can only be used once per mission and unlocks at the Deputy Agent rank.

Voltaic Arc
This ability makes Gremlin shock the enemies if they get close to Patchwork or if she moves too close to them. Like the Chaining Jolt ability, this ability also chains to nearby enemies. Unlocks at the Field Agent rank.

Threat Recognition
This ability allows Patchwork to use her Combat Scanners ability twice in one mission and also grants +25 crit to all squad members at the breach point. Unlocks at the Field Agent rank.

Stasis Field
This ability allows Patchwork to send the Gremlin to the target unit and put it into stasis for one turn. While the unit won’t be able to attack but, it’ll be immune to damage for the duration of the stasis.

Interestingly, it can be used on both enemies and friendlies. The ability has a cooldown of two turns and unlocks at Special Agent rank.

High Voltage
If the Voltaic Arc or Chaining Jolt successfully chains then they deal 1-3 extra damage. This ability unlocks at Senior Agent rank.

Use the Chaining Jolt ability against the robotic enemies as it’s most effective at dealing damage to those. You can also use this ability on the enemies who are weak or harder to hit with guns.

Combine that with Combat Scanners ability to increase squad aim. Blueblood especially benefits from this as it even out the penalty for his Deadeye ability.

That is all for our XCOM Chimera Squad Patchwork Build Guide with tips on how to effectively use the agent and how to unlock abilities. For more on the game also see our Terminal Build Guide and Godmother Build Guide.