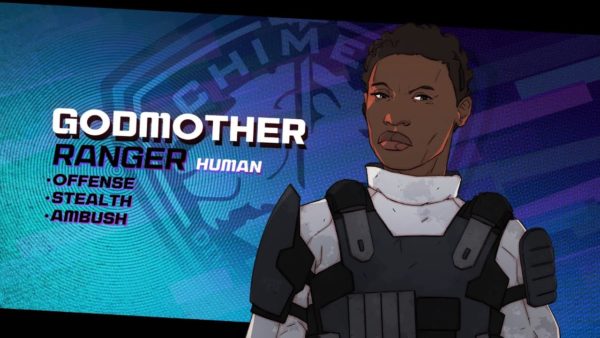 Godmother is a Ranger class human agent in XCOM Chimera Squad. This agent specializes in Offence, stealth, and ambush.

Godmother starts out with a shotgun and the following are the base stats for this agent.

Like all of the other agents in the game, Godmother has unique abilities of her own. The following are the abilities for this agent along with what these abilities can do and how to unlock them.

Scattershot
This ability costs Godmother 2 ammo shots as it fires the shotgun in a short-range cone which damages multiple enemies at once.

Alpha Strike
With this ability, Godmother fires the shotgun during the breach and despite the timeline, will take her turn first. Not only that, she also gets a bonus action on her first turn. However, this ability can only be used once per mission and unlocks at the Deputy Agent rank.

Last Stand
This ability can only be used once per mission and unlocks at Field Agent rank. If Godmother is unimpaired and starts to bleed out, this ability will give reduce her HP to just one and will immediately give her a turn after the current turn.

Flush
This ability allows Godmother to take a shot at the enemy. While the shot deals no damage but, it will make the enemy reposition itself. The ability has a one-turn cooldown and unlocks at Field Agent rank.

Ventilate
With this ability, Godmother fires a shot that has a 100% chance of destroying the enemy’s cover. However, it costs 3 ammo and has a three-turn cooldown. Unlocks at Special Agent rank.

Tips, How To Play

Godmother is a run-and-gun type agent but is adaptable to other playstyles. Players can have her flank the enemy ranks and blast them using the Scattershot ability.

Additionally, if the players have unlocked the FLush ability for Godmother, and any unit has overwatch enabled will fire at the enemy while moving to a new cover.

That is all for our XCOM Chimera Squad Godmother Build Guide with tips on the agent’s unique abilities and how to best utilize the agent. For more on the game also see our Ironman Difficulty Guide and Training Center Upgrades Guide.