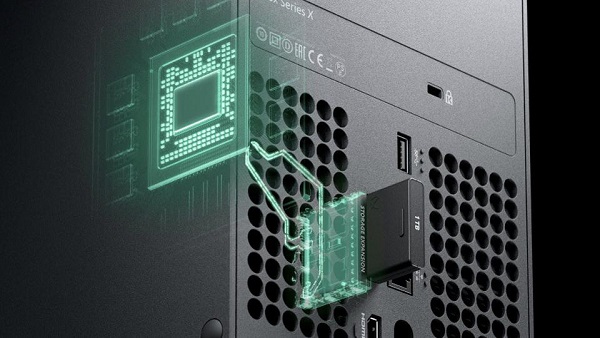 Sony has talked in-depth about the PS5 SSD but for the first time, we are hearing a ton of new details about the SSD used in Microsoft’s Xbox Series X. In an extensive blog post, Microsoft discussed the “Xbox Velocity Architecture” that powers the next-generation of Xbox.

Xbox Series X has an NVME SSD which is the foundation of Microsoft’s Xbox Velocity Architecture. It is their custom, 1TB NVME SSD that delivers 2.4GB/s of raw I/O throughput, 40x more than the base Xbox One. Xbox Series X SSD is designed to deliver consistent, sustained performance as thermals increase, as opposed to Sony’s touted “peak performance.”

An important thing to note is that while raw performance is 2.4 GB/s, Microsoft’s hardware-accelerated decompression will push that number of 4 GB/s, effectively double the performance. This is about 100x the performance of the Xbox One and PS4.

Developers have a guaranteed level of I/O performance at all times and they can reliably design and optimize their games removing the barriers and constraints they have to work around today.

As we already know, Xbox Series X supports expandable storage solutions. Users can expand the storage beyond the 1TB that comes out of the box.

To ensure this same level of consistent performance, Seagate Expandable Storage Card partnered with Microsoft to create a storage solution fit for Xbox Series X. Players will get the same exact gameplay experience regardless of where your game’s stored.

The storage is supported by a new DirectStorage API. The API gives developers fine-grain control over their I/O, allowing them to build “multiple I/O queues, prioritization and minimizing I/O latency.”

These direct, low level access APIs ensure developers will be able to take full advantage of the raw I/O performance afforded by the hardware, resulting in virtually eliminating load times or fast travel systems that are just that . . . fast.

Instead of simply cramping a new GPU and CPU in Xbox Series X, Microsoft invested in a brand new architecture that gives sustained, high-performance across the board. The architecture as a whole will make games better, smoother, and faster. Everything is designed to reduce bottlenecks so that developers are free from current-gen constraints.