Home Hardware Get 3 Months Of Xbox Game Pass With Radeon GPUs And Ryzen... 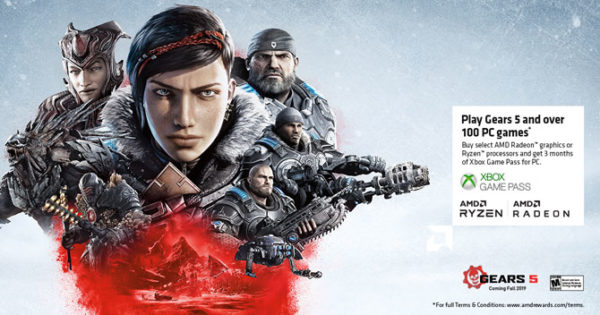 Xbox Game Pass for PC was announced at E3 2019 and beta access is available now but you can get 3 months free with the purchase of AMD Radeon graphics cards or Ryzen CPUs. This gives you access to a library of more than 100 games and you can also play titles like Gear 5 at launch.

This offer applies to the following graphics cards:

You can three months of free Xbox Game Pass on PC with the following AMD Ryzen CPUs:

According to the official site:

With select AMD Radeon graphics or Ryzen processors get 3 months of PC Games with Xbox Game Pass and play Gears 5, coming Fall 2019! From one of gaming’s most acclaimed sagas, Gears is bigger than ever, with five thrilling modes and the deepest campaign yet. With all-out war descending, Kait Diaz breaks away to uncover her connection to the enemy and discovers the true danger to Sera – herself.

AMD has done great since it came back into the CPU market. The 3rd generation of AMD Ryzen has very impressive performance. Intel needs to step things up if it is interested in staying in the game. It has been a while since the company has released anything new. The latest 9th generation CPUs are based on the old 14nm process that has been around for a while.

Let us know what you think about AMD bundling 3 months of Xbox Game Pass for PC with AMD Ryzen and Radeon products.