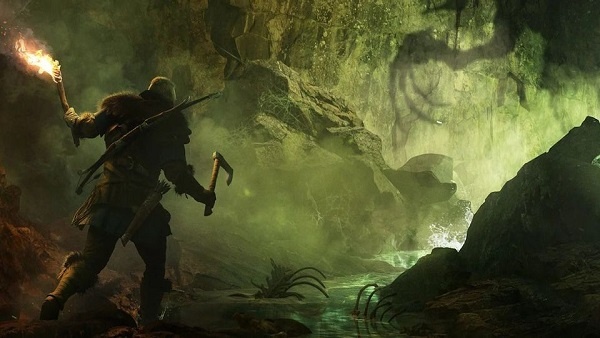 Here’s a complete list of new Wrath of the Druids weapons.

Where to Find: Go to Azar’s trading store where you can get the Iberian Seax dagger as a trade reward. You need 20 Clothing, 30 Luxuries, and 20 Texts.

If you are looking for a nice dagger, Iberian Seax. It is a Raven dagger that allows you to land quick hits and it increases your critical chance after a successful dodge.

Where to Find: When you come to Dublin for the first time, you get the Norse Gael Bow after a cutscene.

The Norse Gael Bow is a light raven bow that is one of the best long-range weapons. The bow will poison the arrow when hitting enemy weak spots.

Where to Find: Lackanscaul in Connacht, inside a chest you come across in the main story.

If close-ranged weapons are your thing, the Ceremonial Sickle is the perfect weapon. It is part of the Bear gear set in Assassin’s Creed Valhalla. When using the sickle you will experience increased attack speed after each it. The effect stacks up to 10 times.

Where to Find: Find and kill the Legendary Black Boar in Connacht.

The Bone Sickle is part of the Raven gear set in Wrath of the Druids. It is a great melee weapon to have and you will experience an increased attack when the weapon is poisoned.

Where to Find: Go to the Azar’s trading store when you reach Dublin reputation rank 2. You will need 20 Luxuries, 30 Delicacies, 40 Texts.

The Egyptian Khopesh is a Great Sword is part of the Bear gear set. It is a great melee weapon to have and you will experience ignite your weapon after each critical hit.

Where to Find: You get the shield as a trade reward at Azar’s trading store when you reach Dublin Reputation Rank 3. You need to 30 Luxuries, 45 Delicacies, 80 Clothing.

Rus’ Shield is part of the bear set, it is a light shield that allows you to block enemy attacks. You will experience an increased attack when surrounded by 3 or more enemies.

Where to Find: You get this as a trade reward at Azar’s trading store once you reach Dublin Reputation Rank 4. You need 35 Luxuries, and 200 Clothing, and 150 Texts.

The spear is a great mid-range weapon in the game. It is part of the Wolf gear set. Using this weapon you will get an increased critical chance the lighter your character is.

Where to Find: You will find this weapon inside the Deidre’s Hut in Connacht. You arrive at this location as part of the main story.

Gae Blog is a spear that’s part of the Wolf gear set in Assassin’s Creed Valhalla Wrath of the Druids. If you manage to hit an enemy 3 consecutive times, lightning shocks the enemy.

Where to Find: You get this shield in the Ui Neill’s Rest in Meath. Check the back of a small cave after you find all five Ui Neill statues to unlock it. They are marked on the map with white icons.

Cu Chulainn Shield is a heavy shield that is part of the bear gear set. It gives you a damage boost based on the duration of your block stance.

Where to Find: You get this shield in Inch Lough Neagh in Ulster. You need to defeat Thorgest’s two Vikings to unlock a quest that takes you to the middle of the lake. Locate the small island in the center where you will find Thorgest’s dead body. Loot the remains to get the shield.

Thorgest’s shield is a light shield part of the Wolf gear set. It gives you increased speed when your character is close to full HP.