Home Guides World of Warcraft Shadowlands: How to Get the Armored Bonehoof Tauralus Mount 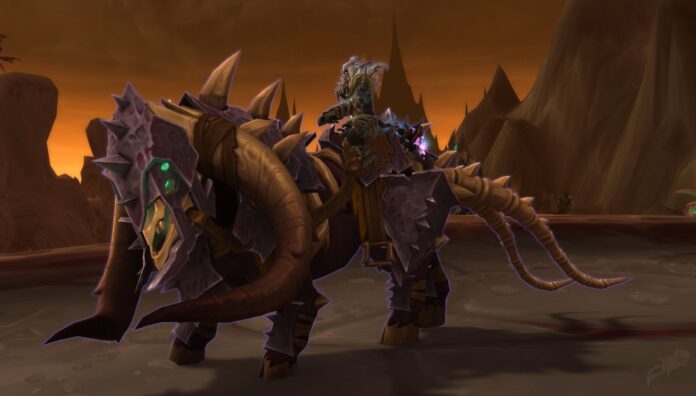 World of Warcraft has always been a massive game and the new Shadowlands expansion has only added to that grandeur. To get around this vast world, there are also numerous mounts or steeds for you to choose from and ride. One such highly craved after mount is the Armored Bonehoof Tauralus and in this guide, we’ll explain everything you need to know on how to get the Armored Bonehoof Tauralus mount in World of Warcraft: Shadowlands.

The Armored Bonehoof Tauralus is a beastly mount that you can either get for your own luxury, gift to a friend or to make a handsome amount of cash. It’s a highly sought after item available only to a specific set of players. To get the mount, you’ll have to meet a certain set of requirements which are explained below.

You can get an Armored Bonehoof Tauralus by beating Sabriel the Bonecleaver, but to get to that point first, you’ll need to play as a Necrolord. You’ll also have to raise your Anima Conductor level to 3. After reaching that level, you’ll need to set your conductor to the Theater of Pain; which let you challenge a powerful enemy.

After meeting with the requirements, you’ll have to find Sabriel. You can do that by going to the central arena of the Theater of Pain. The main places where you should look for him are the corners of the dungeon as he spawns near one of the elites resting inside the corner spheres. Another thing that you can keep an eye out for is Drolkrad, because Sabriel always accompanies Drolkrad.

Once you’ve found Drolkrad, defeat all other champions in the arena, and as soon as Drolkrad plants his feet in the ground, wreak havoc on him. Then beat Sabriel and you’ll get your own Armored Bonehoof Tauralus mount as a reward. Afterward, just ride in style!

And that’s about everything you need to know on how to get the Armored Bonehoof Tauralus mount in World of Warcraft: Shadowlands.