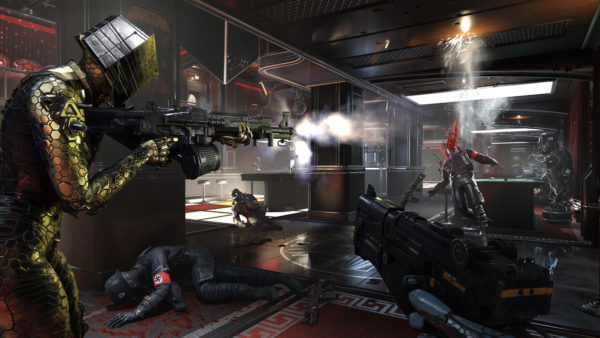 Wolfenstein: Youngblood is the latest entry in the Wolfenstein franchise. This time around the protagonists are two young girls looking for their father who happens to be “B.J. Blazkowicz” himself. Not only that, Youngblood is a co-op game, unlike its predecessors.

However, the PC version of Wolfenstein: Youngblood is facing issues like Could Not Write Crash Dump, the game keeps crashing randomly, stuttering, Disk write error, and more. I am here to provide you with fixes and workarounds to these errors and issues.

Could Not Write Crash Dump Fix

First of all, make sure you are using the latest drivers for your GPU as older GPU drivers tend to create the error.

Another reason for this Wolfenstein: Youngblood error could be the wrong settings for Steam. Right-click on Steam.exe and select properties. Go to the “Compatibility” tab and check “Override high DPI scaling behavior” and select “Application” in the drop-down menu just below it. Apply these settings and restart your PC and the game will start.

if this doesn’t solve the error for you then here’s another fix for you. The reason for the “Could not write crash” error could be because the game is trying to use your iGPU (integrated GPU) instead of the dedicated GPU. You just need to disable the iGPU from the BIOS and play the game without any errors.

Wolfenstein: Youngblood PC players are reporting that the game keeps crashing at launch. Here are a few fixes and workarounds that will help you with the game’s crash at startup issue.

First of all, make sure that your antivirus software or Windows Defender isn’t blocking the game’s exe file by falsely detecting it as a Trojan virus.

You can fix this by either disabling the anti-virus or making an exception for the game’s install folder in your anti-virus software. After that, verify game files and the issue will be fixed.

Another possibility of the game not launching could be the game not having administrative rights. To fix this, open Steam library > right-click Wolfenstein Youngblood > Go to properties > Go to local files > Browse local files > Right-click on the game’s exe file and select settings.

Select the “Compatibility” tab and check the option “Run this program as an administrator” and apply the setting.

Another reason behind Wolfenstein Youngblood keeps crashing at startup could be the use of third-party tools and software like MSI Afterburner. Disable any third-party tool you are using and the crash at launch issue will be fixed.

Wolfenstein Youngblood players are reporting that when the game starts the screen goes green. This is not a critical problem and can easily be fixed.

One fix for this issue is playing the game in windowed mode. If that’s not acceptable for you then there is another way to fix this problem permanently.

There is no one reason why this error might be bothering you. So here are a few fixes that will help you rid of the Disk Write Error.

1 – Let’s start with a simple one. There is a chance that the Steam application doesn’t have the administrative right and is causing the error. right-click on Steam.exe and select “Properties”. Go to the “Compatibility” tab and check “Run this program as an administrator”. Apply the setting and error should be resolved.

2 – Go to Program Files (x86) > Steam > steamapps > common and delete the Wolfenstein Youngblood folder. Now try to install the game again and it should properly install this time around.

3 – If all fails then you can try removing Write Protection. Open CMD and run it as an administrator and use the following commands and press enter after each of them.

4- Some file logs might be corrupted for Steam. Go to Steam/logs/content_log. Scroll down and look for “failed to write”. Open the file and it has paths to some corrupted files. Follow the path and delete these files and Wolfenstein: Youngblood will install on your PC.

5- Your anti-virus might be blocking Steam from installing the game. Disable your anti-virus or Windows Defender to resolve the error.

If all of these fails and there is a chance the HDD might be faulty. So check it for HDD errors.

This is an issue that is popping up for a couple of reasons in Wolfenstein: Youngblood. The first could be the wrong resolution being detected by the game.

To fix this, start the game and press “Alt+Enter” and the game will go into the windowed mode and will start to display. Go to the video settings and change the game’s resolution to the one that is native to your monitor display and you can play the game in Fullscreen mode.

Go to C:\Users\”your username”\Saved Games and delete the save files for Wolfenstein: Youngblood. Then disable cloud-syn and re-enable it and then restart Steam. Now the game will run without a black screen bothering you.

A number of players are experiencing audio issues like disconnecting audio devices, audio de-sync, ambient audio is missing, and more. Here are a few fixes that will help you with Wolfenstein: Youngblood’s audio issues.

Those of you who are experiencing missing ambient audio. Go to Playback devices and select your active audio device. Click on the configure and select the right audio channels for your audio device. Test it and this audio issue will be resolved.

For the audio de-sync issue for Wolfenstein: Youngblood, vertical synchronization might be the culprit behind it. You can fix this by disabling the V.sync.

Players have reported that Wolfenstein Youngblood is crashing with the “D3D Device Has Been Removed” or Fatal error. the following are the error messages that pop up.

D3D Device Has Been Removed

This error occurs if you are playing Wolfenstein: Youngblood on an overclocked GPU or the GPU is just old. First, try updating your GPU drivers.

If the error persists, you can fix these errors by reverting back to the GPU’s default clock speeds if it’s overclocked.

If the GPU is old or is factory overclocked then reduce the GPU’s clock speed by 100 MHz using MSI Afterburner. This will fix the D3D Device Has Been Removed error for Wolfenstein: Youngblood.

In case you don’t want to mess with the GPU clock speed then there is only one alternative. Lock the game’s FPS. Open Nvidia Control Panel > Manage 3D Settings > Program Settings > select “Wolfenstein Youngblood”. Enable “Max FPS Limit” and set the value for the maximum FPS. This is a trial and error to find at which MAx FPS, the game will be stable enough for the error to fix.

Alternatively, players can also lock the game at 30 FPS from the in-game menu. If the game is stable at below 60 FPS, then I recommend locking the game at 30 FPS, as the frame time values will be much more stable. This will fix the Wolfenstein Youngblood crashing issue with the “D3D Device Has Been Removed” error.

Performance or low FPS and stuttering issues are common in PC games and Wolfenstein: Youngblood is no exception to the rule for some players. Here are a few things you can do to fix stuttering and other performance issues.

Make sure you are using the latest GPU drivers and there is no background process running that is unnecessarily using CPU, GPU, or HDD. Just end that process.

Apply these settings and the stuttering will be fixed. In case stuttering or other performance issues still persist, then follow the steps above but, set Vertical Sync to “Fast”. These settings will eliminate stuttering and possibly give you an FPS boost as well.

Out Of Video Memory Fix

According to Wolfenstein: Youngblood PC players they are experiencing a problem where the game tells them that they have ran out of the VRAM but the game continues to run.

For some players, it might be a bug. However, for most of the PC players, this error might be a warning. The textures for this game can take quite a lot of VRAM. Try turning down the texture quality settings and the game running out of video memory issue will be fixed.

There you have it, fixes and workarounds for Wolfenstein: Youngblood errors. I will be updating with more fixes for errors and issues as I find them. If you are facing errors and issues with other PC games or your PC then also see our hub for commonly occurring PC errors and their fixes.