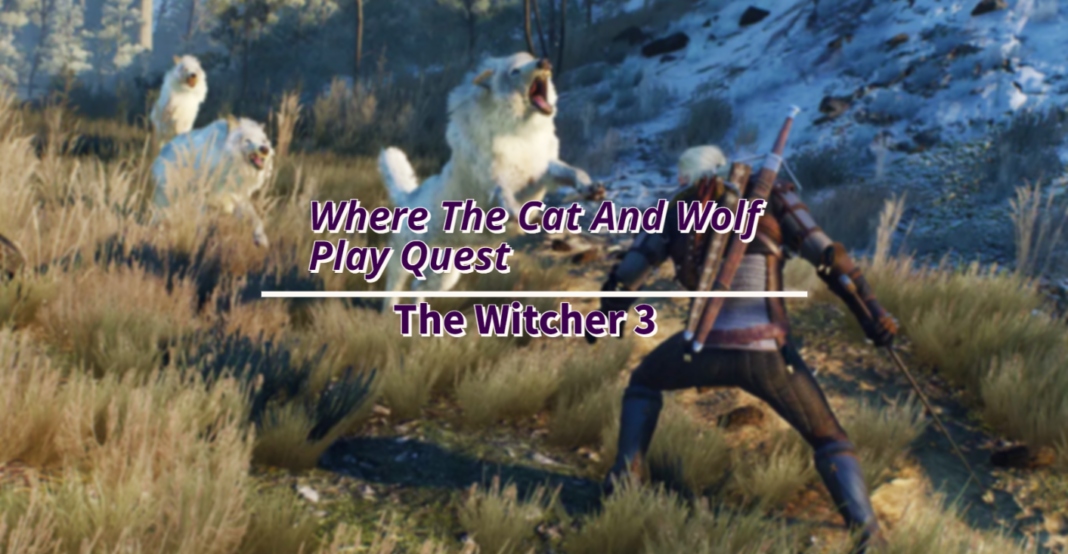 With a whopping sixteen free DLCs to choose from in The Witcher 3. “Where Cat and Wolf Play” offers an engrossing world of intrigue. Dive into this captivating adventure today. Like most players, If you’re stuck on the “Where Cat And Wolf Play” Quest in The Witcher 3, never fear! I’m here to guide you every step of the way – from how to locate it, initiate it, and complete it. With this comprehensive walkthrough, tackling this quest will be a breeze.

If you wish to embark on the adventure of “Where the Cat and Wolf Play,” you must complete the “The Beast of Honorton” contract to unlock it. Keep an eye on Crow’s Perch and Oreton’s boards for the contract related to “The Beast of Honorton.” As soon as you finish the contract, “Where the Cat and Wolf Play” will start immediately.

How To Complete “The Beast of Honorton” Contract

Before the beginning of “The Beast of Honorton” Contract, be sure your minimum level is a minimum of 25. You can effortlessly acquire the contract from either Crow’s Perch or Oreton in no time as you reach the Ealdorman of Honorton, who awaits a discussion between Claywich and Boatmaker’s Hut, fast travel points at No Man’s Land within Velen. Upon your arrival, a ruthless army of monsters will be waiting to massacre the entire village.

Don’t hesitate to take down the monsters you encounter. Once they’re defeated, your Witcher Senses will be activated and provide clues as to what happened at this location – plus help you locate Ealdorman. Unfortunately, when he is discovered, it will be too late; here ends your contract.

Once you have completed the “The Beast of Honorton” Contract, “Where the Cat and Wolf Play” will begin with two objectives:

Using your witcher sense to uncover the answers to the following questions:

Uncover the truth by thoroughly exploring every corner of the village and discover who was behind Ealdorman’s killing. As you investigate, omit no details that could lead to solving this mystery. Thoroughly investigate the huts, and make your way to the barn. Here you will find two more dead bodies. A small girl will come running towards you as soon as she spots you. When you roam around the huts, you may see one with a doll lying on the ground. When you pick up this doll, another mission will be assigned to follow that little girl.

Rely on your Witcher Sense to locate the girl, and you will find her cowering behind a tree. Expect that she may be frightened when you appear, so make sure to choose an empathetic option in the dialog once you’ve approached her. Reassure her of your presence by returning her doll; this small gesture should help put her at ease and allow for meaningful conversation between you.

When the girls realize that you pose no threat to them, they will trust you and reveal their story – it was Gaetan behind all this chaos. He is a witcher from the “School of The Cat” who has been causing trouble in their town.

As you explored the village, you stumbled across an amulet that belonged to Gaetan. Grasping this amulet in your hands, it is time for your Witcher Senses to take over and guide you through tracking down its owner. Once the amulet has been located, the Gaetan will be yours.

Once you locate Gaetan, question him to get the whole story. He alleges that the villagers employed him to eliminate the monster, but once he had completed his mission, they refused to compensate him as promised. In response to their duplicity, he slaughtered all of them in retribution.

Gaetan decides to keep Millie alive because he sees her as his little sister. Now, it’s your choice whether to take Gaetan out or give him a chance at redemption. Whichever route you pick will come with different rewards and consequences.

If you feel that the Gaetan should be held accountable for his actions against the villagers, then it’s time to take care of him. You have two choices: allow him to heal or refuse mercy and commence a fight with him.

It’s wise to refrain from allowing him the opportunity to heal, as this will only ensure a more intense battle and his potential use of his deadly trick. If you choose instead to vanquish Gaetan, you will be generously rewarded with an impressive sword and 200xp points. However, if he is granted permission for healing, all that awaits you is a Teigr Sword – which is practically useless.

If you identify with Gaetan and want to end the animosity, select spearing him as a symbol of your solidarity. After doing this, you will be generously rewarded with a whopping 200 XP without any battle.

Moreover, the Geatan will be impressed with your positive attitude and reward you. He will unveil a secret treasure that can earn you 40 Crowns when everything is said. Furthermore, you’ll enter the “Take What You Want” mission upon completing this quest.

With the help of this guide, you can make the right choice and get the rewards you deserve. Best of luck! If you want to learn more about The Witcher 3: Wild Hunt, here are some more guides you might like: