RespawnFirst
Home News Who Is Kratos Saving In The God Of War Ragnarok Trailer? 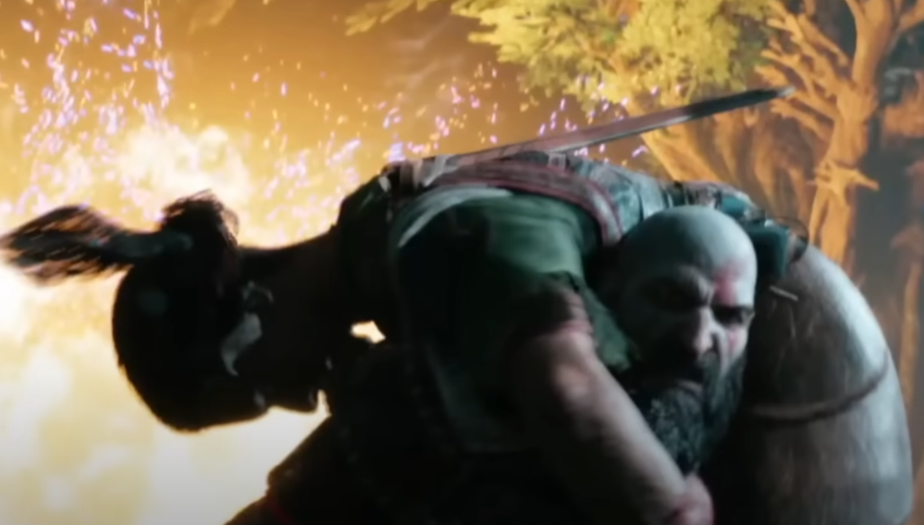 Note: While the article is based on theories, they might be accurate enough to spoil the story of God of War Ragnarok. If you want to enjoy the game and head into the story blind, then you should not read further.

Who Is Kratos Carrying In The Trailer?

Theories suggest that the man Kratos is carrying in the trailer is none other than Freyr, Freya’s brother. He is a Vanir God and the uncle of Baldur. According to Norse mythology, he is associated with sacral kingship, virility, prosperity, sunshine, and fair weather. Freyr is also known to fall in love with a female giant, whom he later marries.

There is evidence to support these claims. Notice that as Kratos carries him, Freyr does not have his sword. While he could have dropped it or it might have been stolen, Freyr’s sword has the ability to fight on its own. So it is possible that while Kratos is running off trying to save Freyr, the sword is covering both of them and protecting them from harm.

As Kratos is carrying Freyr during the trailer, we also see elves in different shots. They seem to be helping Kratos. Freyr is the ruler of the elves, both light and dark. So it makes sense that the elves are coming forward to help their lord escape.

Why Is Kratos Saving Freyr?

It goes without saying that Kratos is not saving Freyr out of the kindness in his heart. There needs to be a reason why. Freyr has to offer something that Kratos needs. During the trailer, we see that the sun and moon are in an eclipse and are not moving. It might be possible that Kratos needs Freyr for temporal magic.

My guess, temporal magic. Dangerous stuff the high Vanir gods used to play around with – the ability to freeze time. Happened to be a favorite of Njord himself in fact.

When Atreus asks Mimir why they stopped using temporal magic, he responds by saying:

Well.. turns out stopping time keeps the sun and moon from streaking across the sky. Unfortunately, it does stop the wolves that chase them. Always looking to sink their teeth in.

Ragnarok starts when the wolves catch the sun and moon, and Kratos might be trying to keep them in place so that the wolves can catch them.

While this is all very interesting and might make sense, know that this is just a theory, and while we have connected plenty of dots, this might not be true at all.

Let us know what you think about this God Of War Ragnarok trailer theory and whether or not you think that the person Kratos is saving is indeed Freyr. If you are interested in learning more, then you can check out our theory on why we think the bald man in the trailer is Odin. You can also check out what Thor voice actor Ryan Hurst had to say about his portrayal of Thor.