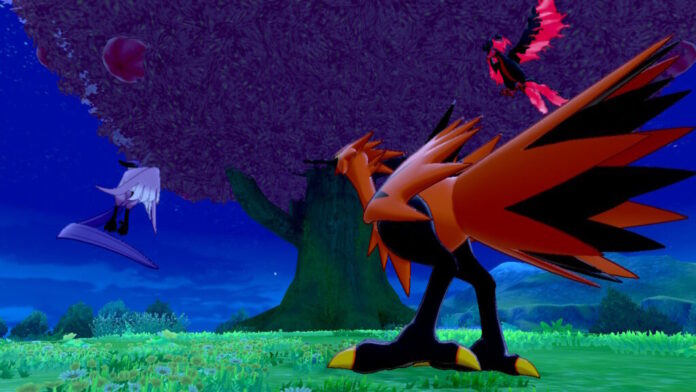 The Crown Tundra DLC in Pokémon Sword and Shield has brought a lot of exciting things in the game out of which Legendary Pokémon were the key feature. The DLC brought many top tier Pokémon with it including Calyrex, Glastrier, Spectrier, Articuno, Zapdos, Moltres, Keldeo, and many more. In this guide, we’ll explain where you can find and catch Galarian Zapdos, Moltres, and Articuno in Pokémon Sword and Shield: The Crown Tundra DLC.

Where to Find Zapdos, Moltres, and Articuno in The Crown Tundra

More and more regional Pokémon forms are spawning in Pokémon games lately since they were first introduced in Pokémon Sun and Moon. Zapdos, Moltres, and Articuno are also in Galarian regional form in the game and can be found in the Galar region.

The first thing that you’ll need to do in order to catch the legendary trio is head over to the Large glowing tree in Dyna Tree Hill which is south of Giant’s bed region. Once there, you’ll notice the three birds arriving and starting a fight amongst them. After a while, they’ll notice you and fly off to different directions for you to find and catch.

Where to Find Galarian Zapdos

Galarian Zapdos is the easiest one to find among the 3. After you disturb their little fight party, Zapdos will fly off to the Wild Area in Galar Region.

It can be found sprinting around in this area and is easily spot-able. Once you spot it, follow it around a bit, and eventually, it will stop to face you in a battle. Be careful, however, because the Galarian Zapdos is quick as you may have noticed from the sprints, and quite powerful too.

Where to Find Galarian Moltres

Galarian Moltres can be found flying around in the Isle of Armor region. Once you spot it, you’ll simply have to cut its path and it will start a battle with you. Don’t chase it in the water as it will be pointless but rather wait for it on the mainland.

The best way to cross its path is to cross the bridge, observe its path, wait for it to come close, and simply move below it. As soon as it sees you, it will attack and then you can capture it in battle.

Where to Find Galarian Articuno

The last one of the bunch, Galarian Articuno is a bit tricky to capture but don’t worry we’ve got you covered. You can find it in the Snowslide Slope area of Crown Tundra, but it can also spawn higher up in the mountain so you’ll have to explore a bit. As soon as you spot it, it will split into 3 and this is the tricky part. You see only one of them is real and you’ll have to run into the real one in order to drag it into battle.

If you run into the false one, it’ll simply fly away and you’ll have to chase it down to its new location which is quite painful. A simple hack to pick the correct one is observing their tail motion, as the real one will have a slightly different tail animation than the fake ones.