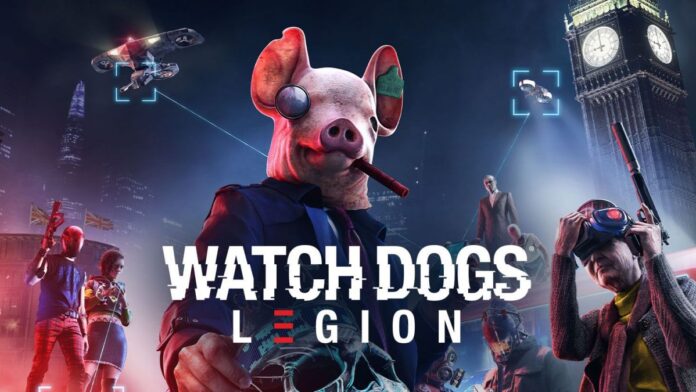 Watch Dogs: Legion has given full liberty to players regarding their character’s appearance. You can get the threads you want from various shops all across London so you’d be, as they say in Britain, drippin’ all the time. Masks are also a fundamental thing appearance-wise in Legion, with a ton of variety scattered all around the map for you to pick up as collectibles. The most sought after and famous out of these are the pig mask and in this guide, we’ll explain how to get them in Watch Dogs: Legion.

How to Get Pig Masks in Watch Dogs: Legion

Pig mask comes in 5 different variants which you can collect and add to your wardrobe. All pig masks available in Legion, along with their location, are as follows:

1. Pink Paper Mask
The pink paper mask can be found in “The Roberts & Scott Hall” located at the edge of the “City of London” borough. The building has two doors and you can enter using either one. The mask is buried under a big pile of cement blocks just by the riverside door. You’ll need the Spider-bot for this one as it’s physically inaccessible for your character to pick up.

2. Black Paper Mask
The black version of the paper pig mask is located inside the building of “BrocaTech” in “City of Westminster”. The building is a restricted area with guards roaming everywhere so you’ll need either the Cargo Drone or the Spider-bot to bypass. We recommend going with the Spider-bot as it is the safer and more effective option. The mask can be found lying on a set of blue barrels on the first floor of the building. Just go straight after crossing the main gate and you’ll find stairs at the end.

3. Golden Paper Mask
The golden paper mask is located on a balcony in “Embassy Garden” in “Nine Elms”. You’ll need to summon the Cargo Drone for this one as the balcony is otherwise impossible to get to.

4. Winston Pig Mask – Pink
Now, to get your hands on the real thing, you’ll need to put in a lot of effort. The legendary Winston pig mask, which also featured on the game cover, can only be obtained as a reward after doing the story mission “DedSec Party” and isn’t available as a collectible. This particular mission is quite far into the game so good luck with that!

5. Winston Pig Mask – Black
The black version of the Winston pig mask can be found inside the DedSec safe-house in “City of Westminster”. As soon as you go downstairs and enter the main area, you’ll notice stairs to your right. Go up and you’ll find the mask lying down past the servers.