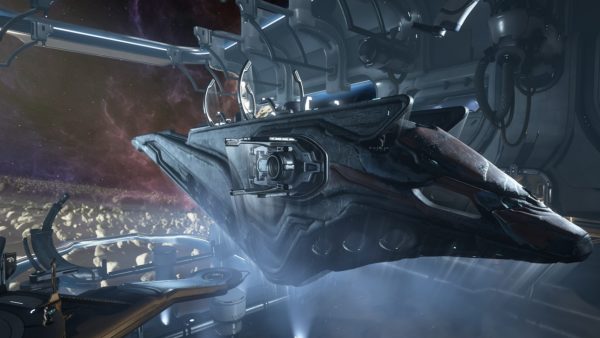 The Railjack in Warframe is a battleship that takes a lot of steps to create. After acquiring the ship you will have to complete certain upgrades to proceed further in the game. In this guide, we will include all the details on Warframe Railjack Research Upgrades.

As I mentioned above that the Railjack is a battleship. If you want to check out information on how to build it then check out our guide on that.

Putting that aside now let us focus on how to upgrade your Railjack in Warframe. First, you need to head to Dry Dock. At Dry Dock, there are two interactive consoles. The left console is for research while the right console is for configuring the battleship.

Check out the upgrades on the left console and if you have the required items then put equipment on upgrade. An item takes around 72 hours for the whole research. Some items might need quite a few Pustrels and Carbides. If you are low on some items required for the upgrade then you can farm them by completing missions.

Following are a few of the researchable equipment of the Railjack:

Rapid-fire toxin cannon: damages enemy vessels with a toxic sludge that can penetrate hulls and cause crews to become confused, turning on their allies.

This is an upgraded version of Carcinnox.

This is an upgraded version of Cryophon.

Arc Weapon: discharges a massive stream of Incendiary energy, latching and frying up to 3 enemy vessels.

This is an upgraded version of Galvarc.

This is an upgraded version of Milati.

This is an upgraded version of Photor.

An upgraded reactor based on the standard issue Sigma series original. +10 Avionics Capacity

An upgraded version of the Sigma Shield Array. +200 Shield Capacity.

The total research cost for all the upgrades in Warframe is:

That is all for our Warframe Railjack Research Upgrades guide. If you are interested in learning more about the game then you can check out our guide on pustrels farming guide.