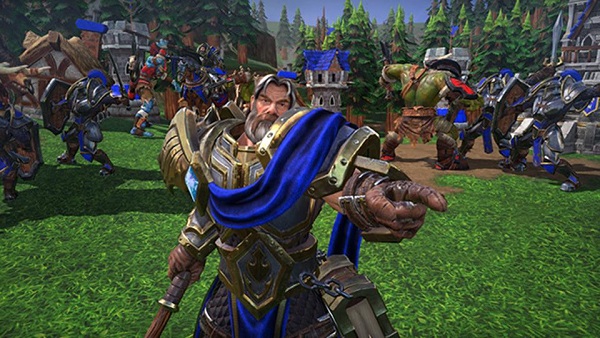 Warcraft 3 is now Reforged which means a ton of new players will be coming in, players who never experienced this classic. Well, for those and everyone else we have a Factions guide that will help you understand all aspects of Warcraft 3 Reforged Factions. The game steps into the modern era with all of its factions updated.

The Reforged version of Warcraft 3 comes with all four of the original factions. Veterans can experience the same unique units and tech trees updated and reimagined for the modern era. The changes bring a fresh look and feel to the Warcraft 3 factions.  While most remain the same, there is a new feature that lets you earn skins to customize your factions. The following are the four factions you can play as.

While you may think something called The Human Alliance would only feature Humans but this faction is is a mix of Elves, Dwarves, and Humans. The faction fell apart but the brave citizens of Lordaeron have taken up arms once again against the enemies of humanity.

The Human Alliance has a versatile army made up of knights and wizards, all standing side by side against the enemies of humanity. This Warcraft 3 Reforged is able to transform peasants into a militia to quickly defend structures. The faction can also deploy extra peasants to construct and repair structures faster.

The faction is made up of Orcs, Tauren, and Orcs. The Orcish Horde wields powerful magic and warriors to make sure they aren’t pawns in the bigger picture ever again.

The orcs are freakishly strong and possess incredible melee power and shamanistic magic. Orc structures can be reinforced with spikes which cause additional damage to attackers. The faction is able to upgrade its units to salvage gold and lumber while attacking enemy buildings.

As the name suggests, The Undead Scourge is made up of thousands of walking corpses, damned mortal men, disembodied spirits, and beings from other dimensions. Warcraft 3 Reforged’s The Undead Scourge faction uses necromancy and the frozen elemental magic.

The faction is able to overwhelm its enemies with the sheer size of the undead. The Undead Scourge faction can summon structures directly into being which helps free up acolytes for other tasks. They can expand the base by spreading Blight and the Undead can regenerate HP when positioned on Blight.

Night Elves consider themselves the superior race but are honorable. They shun the use of arcane magic and embraced nature.

They lack strength but have high stealth, attack range, magic, and stealth. Their structures are sentient trees that are capable of moving and attacking melee units. Many Night Elves can turn invisible when idle.

These are the main four playable factions from Warcraft 3 Reforged. However, there are more factions that aren’t playable but you will come across them during your time in the game. You will meet other factions in the campaign and custom games.

Some of the unplayable factions you come across are Neutral races such as Goblins who offer powerful items. You can also Hire Gnoll mercenaries to attack your enemy camps.

This marks the end of our Warcraft 3 Reforged Factions. If you need more help with the game check out our guides sections for other Warcraft 3 guides.