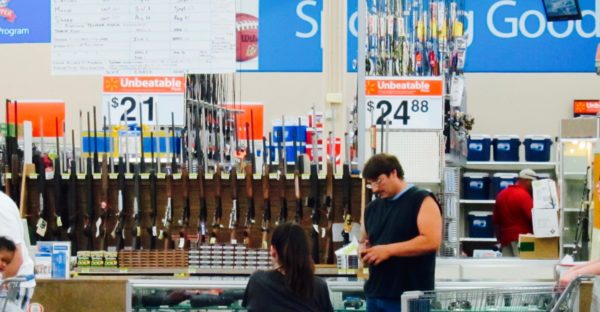 Another tragic shooting incident, another uninformed, baseless and misinterpreted attempt at raising the finger at the video game community. This time, it’s the American retail company, Walmart, who’ve bought into Trump and co’s unsubstantiated claim that violent video games inspire acts of terror and aggression among young individuals of the community.

There were a couple of shootings last weekend, one occurring in Walmart, El Paso and the other being attributed to an equally troubled individual in Dayton. These two incidents bring the total amount of mass shootings in the US to above 250 and we’re only 221 days into the year. As a consequence of these acts of innocent killings, the number of total individuals killed is around 246 with almost close to 1000 being seriously wounded.

Things are only getting worse as July saw the highest number of mass shootings in the year yet, a very saddening 52 in total.  Now we’re past the first week of August and we’ve got another two cases to deal with.

Such events have put America’s controversial gun laws in the spotlight and how they can be altered to provide somewhat of a solution to this violent hysteria. But we won’t go deep into the politics here. Instead, we’ll do our job, which is to shed light on where video games come into this discussion.

In response to these two shootings, the man in the Oval Office chose to address apparently violent video games and attributing the behavior of the gunman on this medium of entertainment. Even if we were to accept, just for a moment, that video games actually do stir up something vile inside individuals, the same could be easily said about films and music, both industries which have never been met with such accusations.

Furthermore, the ESBR system exists for the sole reason of ensuring the wrong type of content doesn’t reach those individuals who are underage to legally purchase the product. So it would still be wrong to put any hint of the blame of these shootings on the video game developers when it’s the responsibility of the parents of the player to restrict the content he or she consumes.

Currently, not a single research or investigation into this subject exists, which might attempt to show a correlation between aggressive tenancies and video games depicting violence.  Still insisting on it, however, Mr. Donald Trump couldn’t help but drag video games yet again into his statement:

“We must stop the glorification of violence in our society. This includes the gruesome and grisly video games that are now commonplace. It is too easy today for troubled youth to surround themselves with a culture that celebrates violence. We must stop or substantially reduce this and it has to begin immediately,”

Walmart was quick to respond to censoring video games adverts, understandably, but not in the way it was expected or reasonable. As per the memo posted by an insider at Walmart, all advertisements (demos, promotional materials, etc.) that depict violence, including combative shooting video games are to be taken down from electronics. This was later confirmed by an employee of the retailer in a statement posted by Vice.

We’re still at a very low point when it comes to handling violence that has nothing to do with the entertainment these individuals consume, at least in a controlled and restricted environment. This again, shifts focus from the problem of gun laws and mass shootings, some serious real-world issues, Then there’s the issue of racist ideologies and the role which media has to play, all of which are much larger contributing factors into these issues than mere video games. But, hey, at least Walmart included movies and other medium in their prohibition of violent content.

Apparently Walmart is telling its employees to take down displays that show violent video games, specifically shooters, as well as movies and hunting videos. pic.twitter.com/2N3t4B86tf

Oh and as you guessed, the tool of destruction itself, the guns and their ammunition is still at full display. Often cited as the “nation’s largest firearms provider”, the current policy allows individuals aged 21 and over to legally purchase weapons including rifles. More to that, there are no policies which restrict weapon buyers to carry their firearms freely inside the retail area.

Perhaps Walmart can work to impose stricter policies regarding the purchase of firearms or outright ban their sale, like Dick’s Sporting Good, did back in Feb 2018 after the Parkland school shootings.