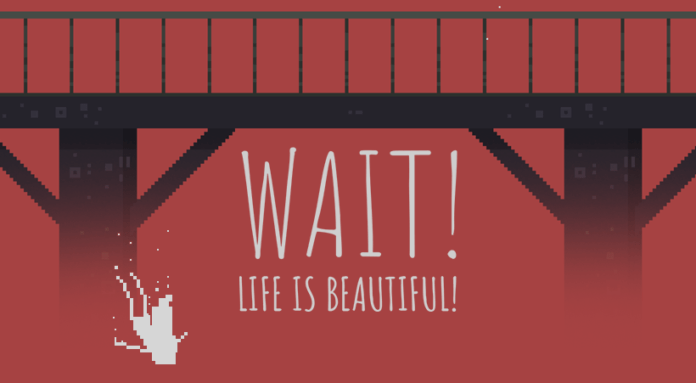 Dramatic Music Plays and GameNet are excited to announce the release date of their very special upcoming game titled Wait Life is Beautiful, The psychological game about suicide prevention will be released on 27 August!

Wait Life is Beautiful is an interactive psychological thriller that looks at suicide. In the game, you take on the role of the main character – an office clerk who is disillusioned with his life and who suddenly finds his calling in rescuing people who find themselves on Suicide Bridge.

Through this game, the developer raises an important topic that is often silenced or only spoken about in whispers in our society. Having independently experienced this dangerous state, the developer uses the game to show signs of disorders that can lead to self-destruction.

He hopes that this project will help people learn to recognize dangerous signals that a person can show in a crisis situation and, perhaps, this will save someone’s life.

You can learn more about the game on Steam and the official website. You can check out the trailer of Wait Life is Beautiful below:

About Dramatic Music Plays
The main and only member of the development team — Egor Perviy — is just at the outset of his game dev career, though he has been an active developer «for the drawer» since 2016.

The burden of being a head of a single-man studio has turned for Egor into the opportunity of realizing his potential as a game designer, graphic designer, motion designer, screenwriter and even a bit as an amateur psychologist.

About GameNet
Since 2010 GameNet has been a long-standing online games publisher in Russia and CIS, released such big titles as Blood and Soul, Black Desert, Battle Carnival and the most recent – Astellia. Nowadays GameNet is taking their first steps as a Steam indie publisher, already presented their first singleplayer title Destiny or Fate.

Let us know what you think about Wait Life Is Beautiful and whether or not you are interested in playing the game once it drops August 27th.

ABOUT US
RespawnFirst is your source of gaming news, reviews, guides, and everything related to PC hardware all in one place. Led by a passionate set of gamers trying to make a mark on the gaming industry. With a combined experience of over 20 years, we strive to bring you only the best possible content.