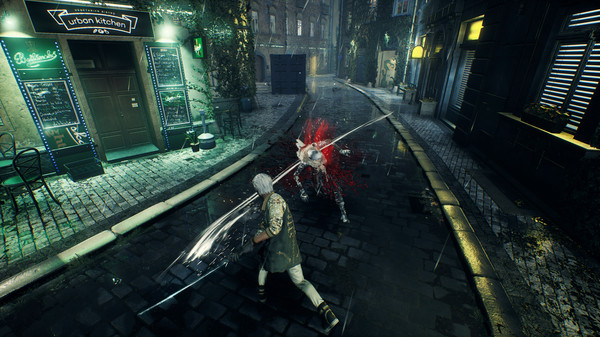 Vampire: The Masquerade is a dark and atmospheric video game that offers players the chance to experience the tense underworld of vampires, featuring a variety of playable characters from different clans and with unique gameplay strategies. Brujah Vandal, a talented fighter who relies on close combat to defeat his enemies, is one of the most compelling characters in this thrilling game.

Brujah Vandal is incredibly versatile, gaining defensive bonuses as he approaches his opponents and using powerful ground pound attacks to weaken them. With his impressive command of both physical and supernatural abilities, Brujah Vandal offers players a genuinely thrilling gaming experience unlike anything else. Whether you’re an aspiring vampire hunter or simply looking for an engaging video game filled with action, Vampire: The Farce is a perfect choice! So check it out today and see what all the fuss is about.

As one of the Brujah clan, the Vandal character has access to powerful vampiric disciplines. Their mastery of the field of Potency gives them incredible strength and physical power, allowing them to make giant leaps across the city with tremendous force and speed. This makes them ideal for quickly transitioning from street level to upper levels to get the Here is the list of the Powers in Vampire:

The access to the “Soaring Leap” power allows players to surprise their foes by suddenly launching into battle from above, catching them off guard even as they react to defend themselves against this sudden attack. With their potent combination of physical strength, speed, and agility, the Vandal character truly stands out among other members of the Brujah clan. Whether escaping trouble or using their enhanced abilities to defeat their foes, these vampires truly embody power in all its forms.

As anyone who has played The Vandal knows, the “Earth Shock” is one of the most powerful tools in their arsenal. Jumping forward and slamming the ground can create a devastating shockwave that stuns foes and leaves them vulnerable to further attack. However, Earth Shock must be used carefully, as it is possible to overshoot the target if used from too close range. However, Earth Shock can be an incredibly effective way to enter combat and take down foes when used from the proper distance. Thanks to its power and versatility, Earth Shock will remain a staple of The Vandal’s repertoire for years to come.

The Vandal is a powerful class in combat, mainly when fighting at close range. Their passive power, “Adrenaline Rush,” provides a bonus to their defenses when they are close to an enemy, making them more resistant to damage. As a result, they often fight with melee weapons that can deal large amounts of damage quickly. However, they can also be effective at range with firearms and other ranged weapons. In addition, their ability to move swiftly and slyly through the battlefield makes them challenging to hit and makes them a difficult target for enemy attacks. As a result, the Vandal is a versatile and dangerous opponent on the battlefield.

The Brujah Vandal is a fierce warrior whose prowess in battle is best demonstrated by the choice of weapon in their arsenal. This vampire’s passive and archetype abilities encourage them to stay close to their opponents, making it essential for the Vandal to wield weapons that can inflict damage at close range. Here is the list of the Best Weapon in Vampire:

The Katana is a powerful weapon in the hands of a skilled user. Not only can it deflect bullets from the front, but it can also close the distance quickly when Earth Shock and Soaring Leap are on cooldown.

The Minigun is a versatile and dangerous weapon, capable of shredding through enemies at close-mid range. Despite the spin-up time before firing, the Minigun is superb for laying down fire and keeping enemies on the defensive. The dense stream of bullets vomited by the Minigun can quickly take down an enemy, and the weapon is also very effective at suppressing fire.

The Assault Rifle is a fantastic choice for nearly any range, making it a suitable substitute for the Silenced SMG or even the Shotguns. Its consistent effectiveness is due to its design. The Assault Rifle is equipped with a muzzle brake and a flash hider.

Silenced SMGs have long been a favorite weapon of Vandal. Known for producing tremendous damage at an extremely high rate of fire, this weapon is ideal for close-range engagements and as a secondary weapon for overtaking opponents.

The pump-action shotgun has long been a staple weapon. Though it is not always the most accurate gun in the game, its significant damage and short-range make it a deadly force at close quarters.

The double-barreled shotgun is a powerful weapon that can deal a lot of damage in a short period. Its high damage output makes it an excellent choice for opening up a fight, as it can quickly take down an opponent before they have a chance to react.

The Brujah Vandal is a fierce melee combatant, renowned for its prowess in close-range combat and ability to survive even the most devastating attacks. This resilience is due primarily to Vandal’s resonances, which favor Sanguine (Pink) and Choleric (Orange). Sanguine resonance provides an excellent boost to survivability, enhancing the Vandal’s natural resistance to damage and allowing it to heal more efficiently. Meanwhile, Choleric resonance gives the Vandal an extra edge on the battlefield, increasing its speed and damage output to help deal ferocious blows.