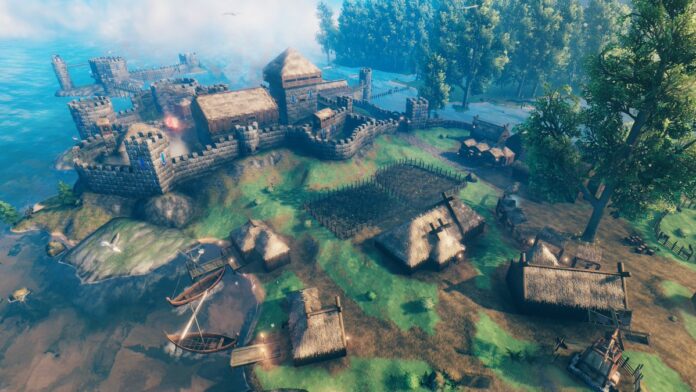 Valheim PC is facing errors and issues like the in-game crash, UnityPlayer.dll Caused Access Violation (0xc0000005), locked FPS, V.sync issue, crash at startup, no audio, stuttering, and more. Here I have compiled a list of errors and issues that PC players are experiencing along with their fixes and workarounds.

Valheim is a Steam Early Access game, at the time of writing, that has become quite popular among PC gamers. Given that the game is still in development, there are bound to be some errors and issues with the game. Valheim PC players are reporting errors and issues like random crashes, UnityPlayer.dll Caused Access Violation (0xc0000005), locked FPS, no audio, stuttering, crash at launch, and more.

Valheim PC players are reporting that the game is crashing randomly while playing. Here is how to fix Valheim in-game crash.

One cause behind the game’s crash is the use of third-party tools and software like MSI Afterburner, RGB software, or mice and keyboard software. Disable any third-party software you are using and also disable Steam overlay and Geforce Experience overlay. This will fix the Valheim in-game crash.

Another reason for the game to crash could be the CPU. While Valheim can easily run on a low-end or mid-range CPU, the processor could be the reason why the game is crashing. Make sure, there is no background process using the CPU. Open Nvidia Control Panel > Manage 3D Settings > Program Settings > select Valheim. Select “Ultra” for “Low Latency Mode” and select “Off” for “Tripple Buffering” and hit apply. This will fix the Valheim in-game crash.

If you don’t want to mess with the GPU clock then try limiting the game’s max FPS. Open Nvidia Control Panel > Manage 3D Settings > Program Settings > select Valheim. Turn on “Max FPS Limit” and set the value to 30 and hit apply. Valheim will not be locking at 30 FPS, reducing CPU and GPU load. This will keep the game from crashing.

Access Violation (0xc0000005) is another error that some players are experiencing with Valheim. Right-click Valheim in Steam > Properties > Local Files > click “Browse”. Look for “Valheim.props” and open it in notepad. Remove the ‘#’ and space before the parameter and save the file. Launch the game and the error will be fixed.

If the error persists, then your anti-virus/Windows Defender might be blocking important game files and causing the 0xc0000005 error. Either disable the real-time protection or exclude the game’s install folder from it. After that, verify game files and launch the game. The error should be fixed.

In case the above fix didn’t work for you then open the command prompt and run it as administrator. Type “sfc /scannow” and press enter. Let the scan complete and after that, the error 0xc0000005 will be fixed.

Third-party tools and software might be causing this particular error. Doable any third-party software you have installed and disable Steam overlay and GeForce Experience overlay. This will fix the UnityPlayer.dll Caused Access Violation (0xc0000005) in Valheim.

Some Valheim PC players are experiencing an issue with the game where it locks at 30 FPS when the v.sync is enabled. The fix for this locked FPS issue is very simple. First, disable the in-game v.sync. Open Nvidia Control Panel > Manage 3D Settings > Program Settings > select Valheim. Set ” Fast” for Vertical Synchronization and hit apply. Make sure to run the game in Fullscreen mode. Launch Valheim and it’ll be running at unlocked FPS without any screen tearing.

A lot of Valheim PC players are reporting that either the game doesn’t start at all or crashes at startup. There are multiple reasons behind the Valheim crash at launch issue and here is how to fix it.

Lack of admin rights could be the reason why the game is crashing. Right-click Valheim’s exe > Properties > Compatibility tab > check “Run this program as administrator” and hit apply. This will fix the game crashing at startup issue.

If Valheim is still crashing at launch, right-click Valheim in Steam > Properties > Local Files > click “Browse”. Launch the game directly from the exe and chances are, you’ll get an error similar to “vcruntime140_1.dll or MSVCP140.dll Was Not Found”. Fix it by installing the latest Microsoft Visual C++ Redistributables both x64 and x86 versions.

According to PC players, they are not getting audio in Valheim. For some players, the audio just disappears after changing the resolution. First, make sure you have selected the right audio output for the game itself. Open Settings > System > Sound > App volume and Device preferences under Advanced Sound options. Check if the audio output device selected for Valheim is the one that you want to use. If not, then just select your preferred audio output and the issue will be fixed.

Another reason for no sound in Valheim is the use of Windows Sonic For Headphones. Right-click the audio icon located to the bottom right of the desktop > Spatial Sound > select off. This will fix the no audio issues with the game.

How To Boost FPS, Performance Fix

Performance is a common issue among PC video games and Valheim is no exception. Players are reporting performance issues like low FPS, stuttering, and more. Here we will help players with how to fix stuttering and low FPS issues.

Launch the game and disable in-game v.sync at it locks the game at 30 FPS for some players and also causes stuttering and set Fullscreen for display mode. Open Nvidia Control Panel > Manage 3D Settings > Program Settings > select Valheim and make the following changes.

Anti-aliasing-FXAA – “Off”
Anti-aliasing-Gamma Correction – “Off”
CUDA GPUs – “All”
Low Latency Mode – Ultra.
Set Power Management to “Prefer Maximum Performance”
Shader Cache – “On” only if you are using an HDD. Don’t need to enable it for an SSD.
Set Texture filtering – Quality to “High Performance”
Triple Buffering – “Off”
Set Vertical Sync to “Fast”

Apply these settings and players will notice improved FPS and the stuttering will be fixed.

That is all for our Valheim fixes for errors and issues like in-game crash, Access Violation (0xc0000005), game not starting, no audio, how to unlock FPS, and more. If you are facing errors and issues with other PC games or your PC then also see our hub for commonly occurring PC errors and their fixes.