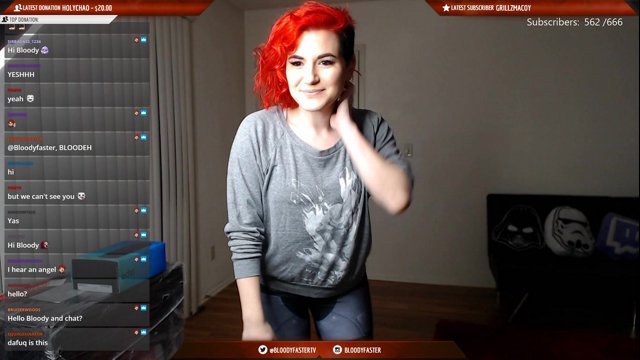 Rape and sexual assault are serious topics and are not to be taken lightly. Due to the sensitivity of these topics, we do not cover such news but I think that this is the best time to spread awareness regarding the matter keeping in mind what has been going on in the gaming industry. Multiple women in the gaming industry have opened up about their experiences. BloodyFaster is one of the streamers who have bravely come forward and shared her rape story.

She was 22 at the time and the man that raped her was 30. She barely knew this person and he forced himself on her. She describes the incident as follows:

One such summer night, I drove once more to hang out with her. Her crush was also there. When the night was over, it was just my friend, her crush, the bar’s owner & myself remaining at the bar. We were all drunk. She told me she wanted to make out with him, and since I knew how much she liked the guy, I agreed to stay behind and wait for her, so that we could do finally go home and crash. It would only be an hour, she said. It was already past 4am. I was exhausted and dizzy.

And then he got up, and casually, he locked the bar’s front door. “For our safety”. There was not a single person walking outside.

He made me a couple more drinks. I decided to just try to keep him occupied with talking about whatever I could think of. I was locked in an empty, dark bar with a stranger. With no one to call out for help. And my friend would not return my texts or my calls. I only had to keep him talking for a couple hours. Everything would be ok.

With the context of the situation out of the way, BloodyFaster went on to describe her rape. She mentioned the following:

After maybe an hour, maybe two, he took me by the hand, and dragged me towards the stairs to the bar’s basement. As soon as we were at the basement, he unzipped his pants and forced his dick in my mouth. Then he proceeded to turn me around and, without using a condom, penetrated me. When he was finished, he acted like nothing had happened.

My friend arrived shortly after. I don’t remember much of what happened next. All I could tell her was that “I’m so embarrassed”. After that, I felt dirty for months, and avoided ever bringing the subject up again.

But, until now, I never thought about it for what it actually was. I was raped. And this realization has broken my heart into a million pieces.

Rape and sexual assault are very serious issues and should not be taken lightly. This is the rape story of BloodyFaster. You can imagine how many women out there face the same thing but do not have an outlet to speak up about it or are too embarrassed to speak out loud.