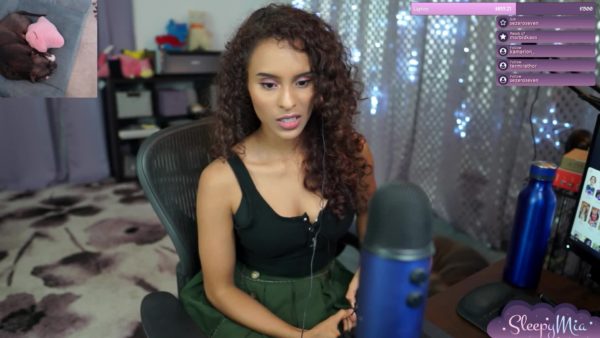 Alinity has had her fair share of controversy over the last couple of month and the Twitch streamer has been accused of animal abuse for a couple of weeks now. First, it was her at but more recently we have seen mistreatment of her dog as well.

While Alinity has not gotten banned or suspended from Twitch, interestingly a smaller streamer has been banned from the platform for animal abuse. She was playing with her dog and got banned for it. The streamer in question is SleepyMia. Here is what she had to say regarding the matter:

I WAS BANNED FOR FUCKING ANIMAL ABUSE WHEN I WAS PLAYING WITH MY FUCKING DOG. THANK YOU TWITCH. ME ROLLING AND PLAYING WITH MY 90LBS PITBULL, YEP, GLAD YOU CAUGHT THAT. pic.twitter.com/lu10mJ0Whl

She mentioned that she was banned for “audible yelps”. Which she denied by stating that her dog rarely makes any noise. She took to Twitter to express herself and mentioned the following:

Remember kids, if you’re not a precious twitch staff waifu, don’t even dare to f**king TOUCH your animals.

Interestingly Alinity has been accused of animal abuse and she has not been banned from Twitch. She has not even got a strike, at least not that we know off. Even PETA wants her banned as well as people from Twitch admin.

It is clear that Twitch is giving Alinity special treatment and this is not the first time that this is coming up. PewDiePie exposed this truth more than a year ago. Reports claim that Alinity has some kind of dirt on Twitch management and that is why she has never got a ban or a suspension of any kind.

We are not sure how true these reports are but keeping in mind that she has never suffered any consequences for her actions, they might as well be true.