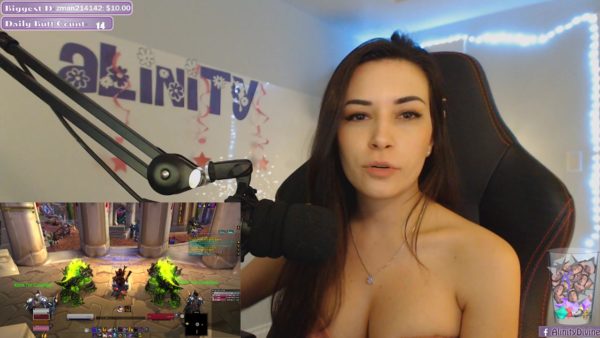 Twitch streamer Alinity has done some controversial stuff in the past. The most recent controversy that has got people angry is animal abuse. Alinity was seen throwing her cat across the room during her Twitch stream and she has also been caught spitting Vodka into her cat’s mouth. Twitch has not commented on the matter or taken any action but the Creative Director of the platform did break the silence and shared his opinion.

Update 5: Saskatoon SPCA has posted its findings after investigating Alinity. You can check out the findings below: 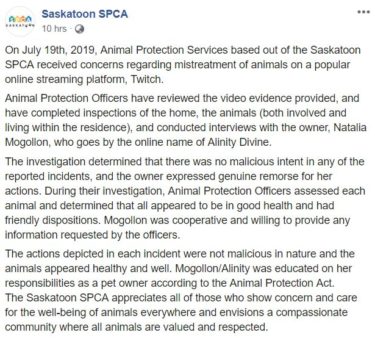 While the agency has provided its findings, people are not satisfied with the outcome. Many claimed that Alinity may have faked how she treats her pets when the agency was conducting its investigation. That could be possible.

Update 4: Pewdiepie exposed Twitch for giving Alinity special treatment more than a year ago. If you go back and watch the video now, it makes a lot of sense. He pointed out back then that she has never been suspended from the platform and how that is one of the issues. If Alinity did get a strike from Twitch then things would be different today.

Update 3: It seems that Alinity has some dirt on the Twitch staff and that is why she had not been banned from the platform yet. YouTuber Keemstar is going to reveal why no action is being taken against the Twitch Streamer. He mentioned the following in a recent Twitter post:

I know the dirt you have on these Twitch staff Alinity! You won’t have that dirt forever. I’m about to drop it! Dear Twitch staff hire your divorce attorneys now!

Keemstart mentioned that he is not sure whether Alinity is blackmailing the Twitch staff but he has confirmed that she does have some dirt on them. This is very interesting indeed.

Update 2: Communications co-ordinator for the Saskatoon SPCA Jasmine Hanson has mentioned that the society is looking for Alinity. Here is her statement according to local radio station ‘650 CKOM‘:

Right now, we’re just trying to identify the individual and locate her address. The reason this is so important is because if we want to investigate the situation, we obviously have to identify the person, and usually a social media profile isn’t enough to go on.

Saskatoon-based thinks that the streamer is in the city but if she is not then other agencies will be contacted. Hanson mentioned that such cases are hard to prove because of the lack of evidence but Alinity has abused her cat live on Twitch so that does make the case much more interesting.

Quite often it’s very difficult for us to prove cases of neglect or cruelty because we don’t have something such as video evidence, so this case is quite unique in that way.

Alinity has contacted the SPCA. She claims that the agency will come to her house to clear the complaints against her. The following is her Tweet regarding the matter:

Called the @SaskatoonSPCA to come check these guys and the home out to clear up the complaints. They’ll be here in a couple days. pic.twitter.com/aDnL12Gw4J

Update 1: It seems that Alinity has been in talks with someone at Twitch and the spokesperson told her that she will not be banned from the platform. A screenshot recently posted on r/LiveStreamFail claims that Alinity mentioned the following during a Twitch live stream:

Don’t worry guys I’m fine. I spoke to someone at Twitch today and I’m not getting banned. But, people who have been harassing me might be.

Alinity claims that the screenshot is fake and posted the following tweet:

Hate to interrupt a good witch hunt in full swing but if you’re using dubious screenshots that are old or fake or whatever else you’re pretty mean spirited. But I guess that’s the point. ??

The original story is as follows:

The Creative Director of Twitch is not the first to get involved with the issue. Many Twitch Streamers, celebrities and even PETA have commented on the matter and there is a petition online to get Alinity banned from Twitch. At the time of this writing, the number of signatures is approaching 15000.

Twitch Creative Director mentioned that he cannot ban Alinity from Twitch but as a cat owner, he feels deeply hurt and wants her banned from the platform. Here is what he had to say regarding the matter:

As a cat owner, I’m very upset over the recent news. I am also someone who does not have moderation powers or enforcement. Just like I can’t fix your subscriptions. I want to see a ban. I do not want to be harassed because you think that’s the right thing to do.

Popular IRL streamer Jenna mentioned that if a man had abused a cat on Twitch he would have been banned by now. It seems that the platform is biased and offers special treatment to female streamers. 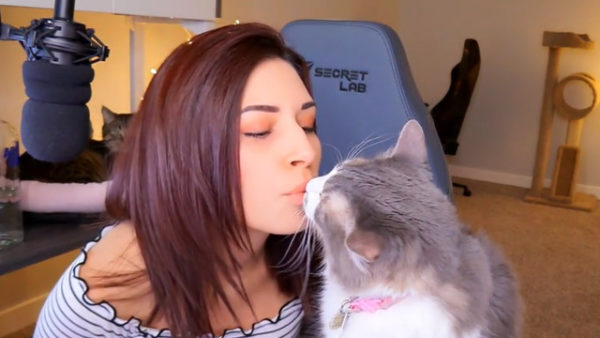 Streamer Kaceytron also joined in and mentioned that prior to this “Kneecoleslaw” was banned for a year for animal abuse. Keeping that in mind Twitch has taken no action against Alinity and is yet to address this.

But Alinity has responded to the issue and claimed that her cat has a warm and safe home. She claimed that it was all a “lapse in judgment.” It will be interesting to see what kind of action Twitch takes against this streamer.

We will keep you updated regarding how this story progresses, so stay tuned for more information and news regarding Twitch streamer Alinity.