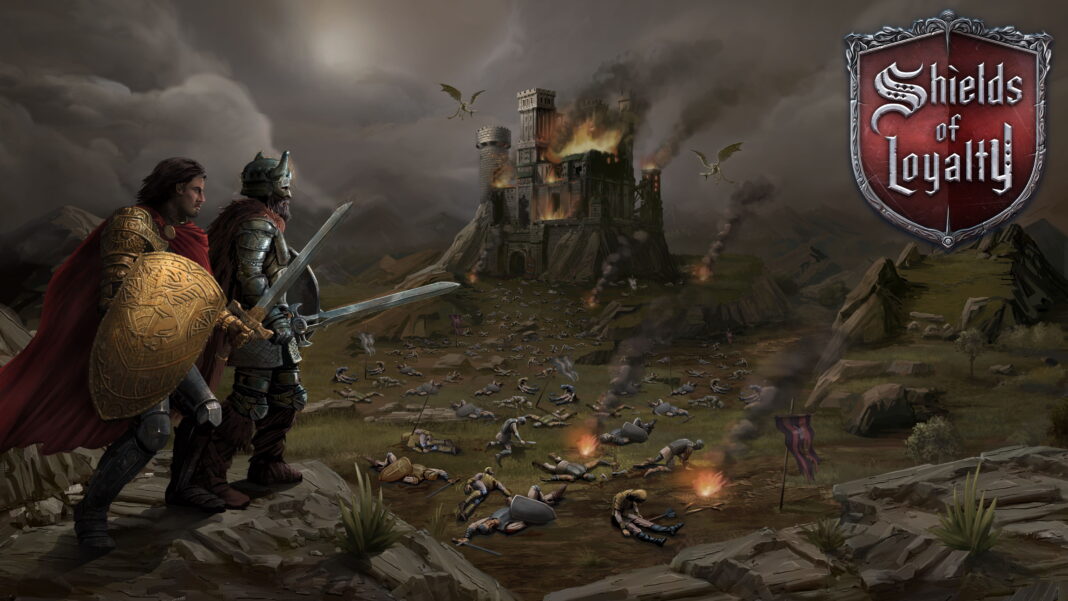 Shields of Loyalty is all about bringing back that golden era gaming bliss of paragons like Fantasy General, HoMM, and Battle Isle. Developed by Mosaic Mask Studio, Shields of Loyalty offers a lovingly crafted 2D dark fantasy world with hex-fields, a host of enemies, events, POIs, a huge variety of tactical choices, a massive world to explore, and a challenging difficulty level all refined by modern gameplay mechanics and quality of life improvements. Armchair generals will feel directly at home with the old “one more round” nostalgia and high replay-value Shields of Loyalty offers.

Mosaic Mask Studio is thrilled to unveil a new gameplay trailer capturing the vibes of this golden gaming TBS era:

Mosaic Mask Studio has recently updated Shields of Loyalty to version 0.8.1 on Steam, bringing it closer to its planned end of 2022 full release. Update 0.8.1 refines the earlier 0.8-patch that brought massive new content such as a brand new island, with 9 levels set in a landscape completely covered by snow and ice and added a host of new enemies, new events, POIs, and much more to the gameplay experience. For the full list of changes head over to Shields of Loyalty’s Steam page.

Since we at Mosaic Mask Studio are a very small outfit with only 6 people working on Shields of Loyalty, I am very proud of the team for achieving this milestone, bringing us ever closer to release. It is a labor of love, since we all love the turn-based classic and want to bring back the nostalgia to lovers of the genre, refined by modern gameplay mechanics and quality of life improvements,

About Shields of Loyalty

Shields of Loyalty is a turn-based dark fantasy strategy game in 2D that takes on the legacy of the genre classics like Fantasy General, HOMM, and Battle Isle and enriches them with great new features and modern gameplay. Experience challenging TBS action with high replay value on the island world of Mantaria and lead your army victoriously from battle to battle!

Shields of Loyalty is the turn-based strategy game to play to keep the legacy of the genre classics alive while adding new features and modern gameplay mechanics. Set in a lovingly crafted 2D dark fantasy world, Shields of Loyalty will have players stay in the world of Mantaria for just one more round. Challenging turn-based battles with high replayability value will keep armchair generals victorious from battle to battle!

Let us know what you think about Shields Of Loyalty and whether or not this is something that you would be interested in checking out.