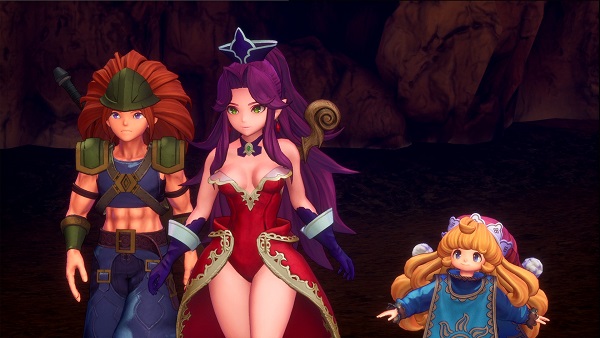 There are a total of six starting characters to choose from in Trials of Mana. Out of these six, you can only choose three whom you will be locked with through the entirety of the game. You will be able to swap to any of the three but not actually change them. The option to change the class of your selected characters is always there though. In this guide, we’ll give you an overview of six starting characters in Trials of Mana.

Arguably one of the strongest ranged characters in Trials of Mana. Thanks to her high spirit and intellect, Angela is capable of providing hard-hitting spells and CC. It is important to note that her physical damage leaves a lot to be desired but that is not where her strengths lie. She has incredible AoE spells with far-reaching range.

Angela’s starting ability is called Double Slash which lets her quickly lunge forward and deal damage with her wand. If I could recommend one character from the game, I’d definitely recommend her.

Charlotte is a support character in Trials of Mana. Due to her high intellect, luck, and spirit, she is an excellent healer. Aside from healing, she also has a range of debuffs and somewhat decent DPS spells.

Charlotte’s starting ability is called Whackbam which lets her lunge and damage enemies with a flail. The damage output of the ability leaves a lot to be desired but once again, she is not a DPS character. But since some other characters like Duran can also learn healing spells, is she really worth a slot?

Being a strong melee character, Duran relies on his swords more than anything else. Aside from his high physical damage output, he is also a decent tank, thanks to his high stamina and strength. He is also capable of a handful of spells that give him healing capabilities or elemental damage.

Duran’s starting ability is Cross Cut that lets him leap forward followed by a damaging cross slash. He is an all-around balanced character that you should consider having in your party.

Hawkeye in Trials of Mana is highly situational. He can move in and out of a battle quickly and is able to deal high damage within a short span of time. Being a thief and due to high stats in luck, he can also help you find loot. You can also use him to set up traps and deal AoE damage to your enemies.

Hawkeye’s starting ability is called Poison Dagger which lets him damage enemies in front of him with a 2-handed knife.

Another melee character with high damage output, buffs, and debuffs. It you like to play glass-cannon characters who pack a punch but are squishy, Kevin is the perfect character for you. With his high luck, strength, and spirit, he can have some healing capabilities and prove to be a valuable asset to your party.

Kevin’s starting ability is called Phenomenal Fist which lets him perform a heel & punch combo that deals high damage to the enemies.

If there is a good all-round character in Trials of Mana alongside Duran, it has to be Riesz. She is a ranged character who can buff party members or debuff enemies while providing excellent DPS with her summons.

Riesz’s starting ability is called Whirlwind Spear which creates a tornado that stops enemies in their tracks and continues to damage them. Moreover, she’s cute which is always a plus.