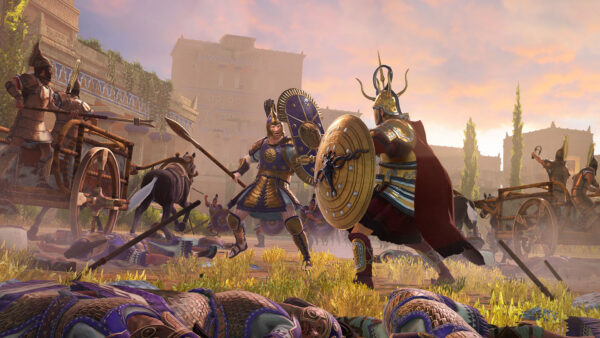 King Agamemnon is the ruler of Mycenae in Total War Saga: Troy, the faction is at the onset of the Trojan War. He commands the largest fleet to ever sail the Aegean Sea. King Agamemnon has a never-ending lust for power and glory. His lust led him to rail down many kingdoms Achaea. Despite his age is still inspired awe in the battlegrounds with his heavy armor and deadly swings of his mace. In this guide, we will discuss everything about King Agamemnon’s victory conditions, unique units, factions, and faction abilities.

King Agamemnon wants to be the High King of all Achaeans. While he is a formidable leader, he can be hubris. His arrogance and pride offended apollo and he provoked Achilles into stepping back from the Myrmidons.

Playing as Agamemnon requires a great understanding of his faction and faction abilities. Agamemnon is an aggressive character who simply wants to expand his territory and go to war. Make sure to choose allies in stronger regions first, and get territories that lead to the Aegean Sea.

There are two main elements to Agamemnon’s playstyle, The Lion’s Share, and King of Men.

Using The Lion’s Share you can entice or force other factions to join your vessels. This is important because vessels obey you and give you resources at every turn. Since they are under your control you can use Agamemnon to extort your vessels for more resources. Use The Lion’s Share screen to receive a lump sum of resources from your vessels. It is a great way to get more bronze or food. However, keep in mind that if you use the export option too many times and too often, your vessels might turn on you. Once they turn on you it’ll become harder to make them obey and get resources from them. Moreover, you’ll need plenty of influence to get them in line.

Using the King of Men ability you can appoint heroes to court positions. Your appointed heroes will get bonuses and provide factionwide effects. Being in court will increase a hero’s motivation. This is a great unique mechanic, occupying political positions gives Agamemnon bonuses for how many he can fill. If you want to bring down the recruitment cost you can fill the Heqetai positions. Meanwhile, the Telestas brings down the cost of the action of priestesses.

Homeric Victory is the special victory path you can take with Agamemnon’s faction. You don’t have to take this path, you can simply complete the Total War victory and get the big W. The following are the victory conditions for Homeric Victory.

Must have 60% Achaean influence on the following provinces:

Agamemnon has 3 unique units including Agamemnon’s Companions, Agamemnon’s Guards, Light Javelinmen. That’s pretty much all you need to know before playing with Agamemnon in Total War Saga: Troy.