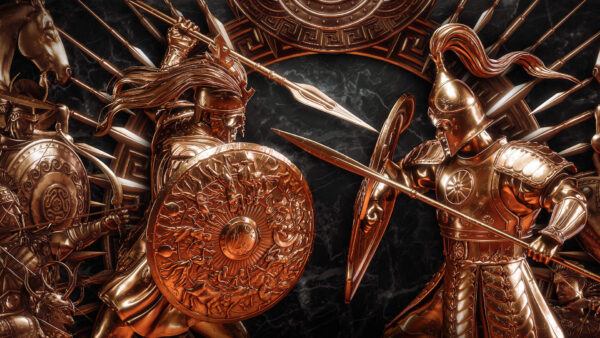 One of the playable characters in Total War Saga: Troy is Achilles. He is the renowned leader of the Myrmidons, a formidable force from Phthia. It is said that this force was created by Zeus himself from a colony of ants. This faction fights with ferocity and won countless battles against formidable foes. The deadly faction led by Achilles is a force of being reckoned with. In this guide, we will go through Achilles faction abilities, victory conditions, and unique units that are available in Total War Saga: Troy. Achilles has multiple faction abilities that are in-line with his personality in Total War Saga: Troy. Achilles is an offensive character in Total War and aims to defeat anyone who stands in his way. His goal is complete supremacy but all the glory went to his head which made him arrogant and short-tempered. Hot-blooded Achilles has mood swings that are bad for everyone around him.

At the very beginning of the Achilles campaign, he will face the Ellopian army that invades Phthia. His objective will be to push back the Ellopian army to the isle of Euboea and then consider a northern expansion. These opportunities come through the wealthy Magnetes and Pelasgiotes. In the north-west, you can either side of Thessalians or make them an enemy. Meanwhile, to the south side Achilles has strong allies including Ajax the Lesser, and his father Oileus. On the east side, we have the isle of Skyros that’s ruled by King Lycomedes.

There are two main faction elements for Achilles in Total War Saga: Troy.

Being a living legend increases influence and reduce factionwide unit upkeep. Other challenger fighters will arise so the people might doubt your greatness. However, you can convince the challenger to acknowledge you or fight them.

Achilles has mood swings and his emotions control him. This affects everyone around him.

Myrmidon Swordsmen is one of the unique faction units available to Achilles in Total War Saga: Troy. They have a medium weight class and thanks to its flanking immunity this unit can’t be flanked. The Myrmidon Swordsmen used unbreakable shields to protect themselves. The following are the starting stats for Myrmidon Swordsmen.

Aeginian Jevelin Men are the Jevelin Infantry.  This unit belongs to the Lightweight class and is shielded. This unique unit is agile, swift-footed, and can pierce armor. The following are the starting stats for Aeginian Jevelin Men.

In this section, we will discuss the victory conditions for Achilles. Stay-tuned as update this section. This guide is still a work in progress.

I hope this guide helps you better understand how to play with Achilles and who this character is for. If you need more help with the game check out the Total War Saga: Troy Wiki.