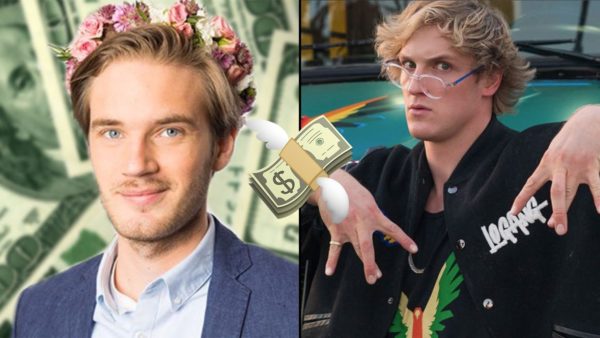 Our boys Pewds has a huge channel and even though his editor, Brad1 just left, he still has a huge following and gets millions of views each day. He is on the top of our list when it comes to YouTubers with the most ad revenue and merch sales. He makes a lot of money from the ads that are shown on his videos but he also sells a lot of his own merchandise. The following are the numbers that you should know about when it comes to the top ten YouTubers and how much money they make from ad revenue:

At the top we have Pewds. He makes double what Dude Perfect makes in a month. Jake and Logan do not seem to be doing all that great compared to the other top YouTubers and their monthly Ad revenue. We have Ninja, that is not really a big YouTuber. He is better known for streaming and has signed with Mixer, so he is good for now. Nigahiga does pretty well keeping in mind he only uploads once a month, roughly.

These numbers are taken from Purple Moon via PRWeek. These might be accurate to a certain degree but as no one except for the YouTubers themselves know how much money they make, some guesswork has gone into these numbers and how they are calculated. The actual figures could be much higher or lower. There is no way of knowing for sure.

Now that we know about the ad revenue that these YouTubers get, we can move on to the merch sales. The following are the top YouTubers ranked according to merch sales: