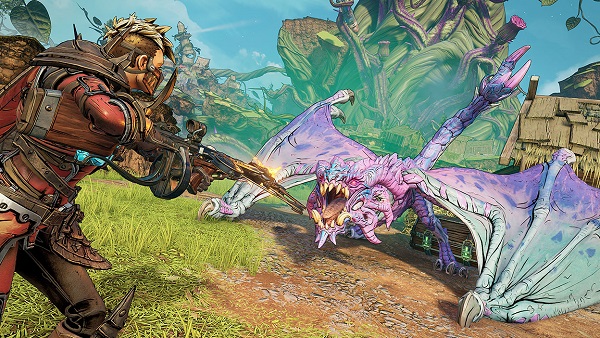 In Tiny Tina’s Wonderlands, spells are something that helps you get an edge in combat. This feature is brand new for the Borderlands spin-off. Instead of using grenades, you will be using spells which means there isn’t a grenade slot in the game.

This guide will discuss everything you need to know about every legendary spell available in Tiny Tina’s Wonderlands.

The following is the complete list of Legendary Spells and what they do.

This spell lets out a toasted marshmallow that sticks to the enemy. The big marshmallow will then explode into tiny pieces of healing items.

This spell allows you to release a bouncing pool of poison with every bounce. It is a great spell to have for crowd management. The cube explodes once the spell duration ends, releasing even more poison.

This spell allows you to shoot a lightning rod which then summons a bolt from the sky on the target location. You can use this spell to revive and heal allies in Co-Op mode.

An energy orb is released in the area that shoots energy beams but moves slowly. It is great for clearing slow-moving enemies, but others won’t be an easy target. You can release the orb every few seconds thanks to faster recharge.

This spell allows you to summon a large shard of ice from the ground in a straight line. The spell does damage and Frost, but the spell is wasted if the enemy moves out of the way.

As the name suggests, this spell releases a single bolt of energy to deal a good amount of damage to the target. The cooldown duration is reduced if you get a crit with this spell.

It works the same way as the Arcane Bold, but it’s exclusive to Chaos Chamber. This spell is a must-have in your inventory if you are using a crit build.

Two elemental effects are put together to create a vortex that sucks enemies in as it moves around the battlefield. Smaller enemies stand no chance, while larger ones take a decent amount of damage.

This spell is limited to Next-Level/Chaotic Great Editions of the game. You can summon a spectral skull that rushes an enemy and explodes.

A frost orb is released on the battlefield that does heavy damage and can kill multiple targets. However, you need to make sure its trajectory has multiple enemies to get the most out of it.

Multiple projectiles are shot through the air but only after the spell ends. Timing this spell is hard but the damage is more than enough to kill heavy enemies.

The spell gives you special buffs for your attacks for a short period. There is no active damage with this spell but all attacks you perform get buffs.

Using this spell, you can summon flames from your hands for Fire damage. The spell is most effective against a single target.

Multiple spinning blades are released upon your enemies. They bounce around the area, dealing a ton of damage to the enemies.