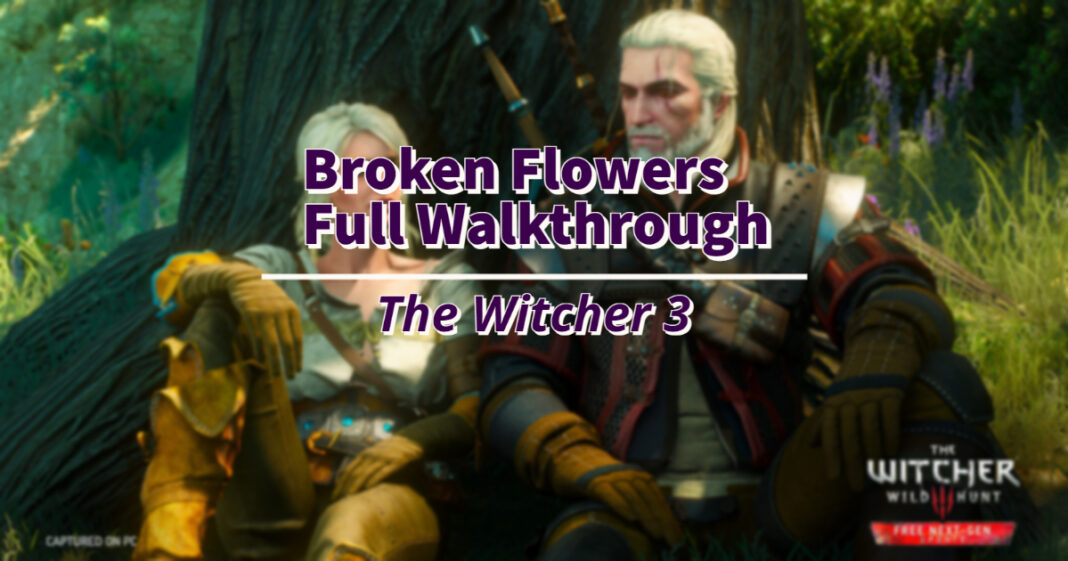 After Geralt arrives in Novigard (Novi Gard), he will find the Broken Flowers quest waiting for him. Not only does this mission provide a clue to Ciri’s whereabouts, but it also serves as an example of his strong connection with Dandelion. This guide will provide a comprehensive walkthrough of the game Broken Flowers in The Witcher 3.

How To Start Broken Flowers Quest

Ready for a fantastic adventure? The Broken Flowers quest awaits you as soon as you set foot in Novigrad. As soon as information about Ciri’s contract with Dandelion comes up, the journey begins automatically – no further action is needed on your part.

Dandelion may know the whereabouts of Ciri. Recently, he gained possession of a bordello in the Rosemary and Thyme area on Glory Lane in Novigrad. If you’re coming from southward, it’s easy to spot Brother’s Inn at the Hierarch signpost close to the Gate of the Hierarch.

How To Complete The Broken Flower Quest (Complete Walkthrough)

Upon arrival at the bordello, Zoltan – Gearlt’s treasured mate – will welcome you. Unfortunately, a slew of drifters are unwelcomingly lingering and have yet to depart. You must assist him in taking charge and expelling this uninvited bunch.

Zoltan discloses that Ciri is in the vicinity, but he does not know her exact whereabouts; even more troublingly, Dandelion – who may have known where she was heading – has gone missing. Investigating the women Dandelion spends his time with is beneficial in understanding him better. Utilize your Witcher Senses to locate his planner on the first floor and learn more about what makes Dandelion tick.

Begin your investigation with Vespula, who inhabits the area surrounding a bordello. After you trace her movements on the map, you will find her harassed by four men over unpaid debts. Select any choice from the conversation menu, and show those men a lesson they will remember. After aiding Vespula, inquire about Dandelion; she will inform you that she spotted him near the harbor with another woman.

You will come across Elihal the tailor in your next investigative mission again. He is waiting for your return at the exact location from when you first crossed paths during the A Matter of Life and Death quest. So take a deep breath and prepare yourself to confront him once more. Unfortunately, Elihal won’t be able to provide you with any information about Dandelion since he last saw him some time ago.

At Baroness la Valette’s Villa in Gildorf, Novigrad, Molly awaits. The information she gives you hinges on the fate of Aryan – Maria Louisa’s son from Witcher 2 – which, if spared, can be used to your advantage upon visiting her. If, instead, you chose a more grim outcome for him, except that Molly will not take kindly to your presence. To access Maria and the Vegelbud Residence, accompanied by imposter “Morvran Voorhis,” you must show mercy when presented with a chance to spare Aryans’ life.

Upon arriving at the Vegelbud Residence, you will be confronted by an individual claiming to be “Morvran Voorhis,” ready for a horse riding race while Molly is not present. Challenge him and prove your worthiness as a champion racer; should you overcome the imposter’s challenge, you will receive a glorious reward: The Superior Racing Saddle.

Once you’re done with that, get in touch with Molly or “Lady la Attard” to learn more about Dandelion. Molly has a remarkable and entertaining story about how a poet came to her aid. The individual even had a sibling too. Unfortunately, she hasn’t seen the poet in years but still fondly remembers their encounter.

Morvran Voorhis will patiently await the completion of your conversation with Molly and, upon its conclusion, inquire if he can accompany you on this exhilarating journey.

If you wish to discover and investigate Marabella, a journey to the La Valette estate in The Bits is essential. Once there, you will come across a school where she teaches classes; when arriving at the building, she’ll likely be in class with her students – so kindly wait outside for her. You can either wait outside or have a face-to-face conversation with her regarding the vanished poet.

To find and investigate Marabella, you must go to La Valette estate in The Bits, where you will find a school because she is a teacher. When you go to her school, you will find out that she is teaching a class and ask you to wait outside. You can either wait outside or have a face-to-face conversation with her regarding the vanished poet.

As the class adjourns, Marabella is available to answer any remaining questions. Asking about Dandelion, he mentioned reading a book on mold and then suddenly losing interest in it – thus ending their relationship abruptly.

After interrogating Zoltan about Rosa var Attre, navigate to the Attre estate in Gilsdorf of Novigrad. This is where you’ll encounter Rose. As you approach her premises, a guard will query who you are and why you want to enter. To gain entry to the estate, you must inform the guard that you have recently been hired as a swordplay instructor. Once inside, follow the Passiflora garden until it leads directly to your destination on the right.

Continue ahead until you reach a heavenly angel statue encircled by stone benches. Keep going until you find a Rose – when you do, tell her your name is Geralt, and she will arrange an appointment for you to become the new swordplay instructor. She’ll then ask to meet with you in the training room, so make sure to be there.

Demonstrate your sword mastery to Rosa by selecting the wooden blade and engaging her in combat. Once you have bested her, she will no doubt admire and appreciate you for your skill.

Now inquire Rose regarding her oratorical instructor, Dandelion. If you do so successfully, she will insist on a rematch in which you must prevail. At this point, she will invite you to be her teacher, thus beginning another side quest – “Fencing Lessons.” It is entirely up to you whether or not you want to start this mission now or wait until later.

After this cutscene, you will be introduced to Edna; she is Rose’s twin who resides in the Garden. She will share stories about her time with a certain poet and how he took her to a cemetery for an Oxenfurt professor’s celebration. Additionally, she’ll reminisce on Margrave Henckel -someone who wholeheartedly supported young creatives and whose legacy has left an indelible mark.

Suddenly, Edna recalls Dandelion mentioning “Callonetta,” the poetess. Once the NPC appears, inquiring about fencing lessons, players can pursue this side quest later in their journey. Then, having finished their dialogue, players are free to move on with their adventure.

Once you’ve looked into each person, return to the bordello and tell Zoltan all you have discovered. As soon as you reach him, it will be evident he is training his owl to talk; after sharing your discoveries, Zoltan seems to need help to draw something valuable from the information gathered. During your conversation, however, he fails to mention Priscilla, which means that further investigation of her is necessary for a more definitive conclusion.

Make sure to take advantage of Priscilla’s sensational performance at the Kingfisher! You and Zoltan will be delighted to hear her enchanting romantic song, where your love story with Yeniffer is mentioned. After she has finished singing, a cutscene automatically triggers in which you applaud Priscilla – however, this sparks suspicion as Elsa thinks that you’re a murderer. Fortunately, nothing comes of it, and afterward, Priscilla and Zoltan take the time to introduce yourselves to each other. It promises to be an unforgettable evening.

Priscilla will tell you about how the Dandelion recounted your romantic escapades with a variety of enchantresses. When asked about the missing bard, she diverted the conversation and told you that Dandelion had been planning a heist at Sigi Reuven’s hideout before his disappearance. He was eventually found causing mayhem at Whoreson Junior’s vault. That’s why the Whoreson people were searching for him throughout town.

Now proceed to Sigi Reuven and hear about Whoreson Junior’s whereabouts, completing the quest here. Hopefully, you can continue exploring The Witcher 3 world with more experience and understanding now, so take advantage of that!

That’s all you need to know about completing the Broken Flowers quest. Need more help with the game? Here are some guides you might like: