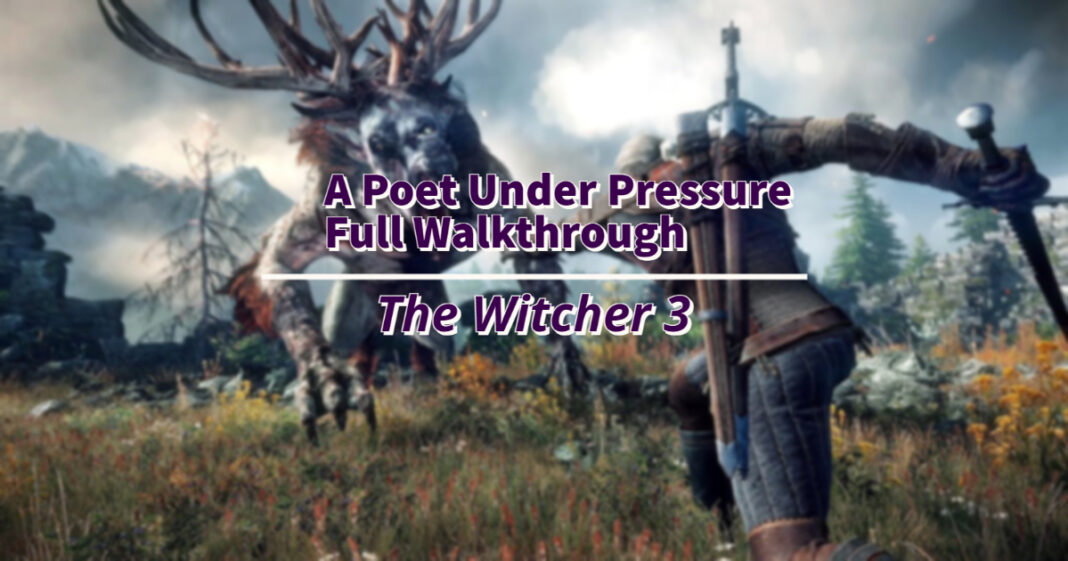 As you play the “The Play’s The Thing” main quest in Novigrad, you will come across Dudu. Later on, your journey continues, and a new quest called “A Poet Under Pressure” kick off in The Witcher 3: Wild Hunt. The main objective in this quest is for Geralt and Zoltan to free their beloved Dandelion from his captor’s grasp; they must foil the Caravan taking him away from Temple Isle towards Oxenfurt. To carry out their daring rescue plan successfully, it was agreed upon for Dudu to deliver an important message when the Caravan commences its voyage.

Are you looking to start the Blood and Wine expansion in The Witcher 3? If so, you must first complete “A Poet Under Pressure” quest. This guide will provide a step-by-step guide on how to do just that.

Completing the “A Poet Under Pressure” Quest will require considerable effort. Despite Zoltan’s assistance, you may need to request Djikstra’s aid to succeed. Fortunately, having additional manpower can make all the difference when it comes time to free Dandelion.

If you need aid from Djikstra, assist him in the hunt for Count Reuven’s Treasure; if this has already been accomplished, he will provide three of his men to ambush your enemies. Furthermore, by engaging with Djikstra more extensively, he may lend a fourth soldier to bolster your ranks further. Moreover, Dijkstra will happily lend six of his men if you share your plan with him. Therefore, embark on your mission and venture east of Seven Cats Inn to the ambush site. When you arrive, make your move.

Follow the marker outside of town, and you will see a group of men hiding in the bushes. These people are part of Dandelion’s Free Plan; after that, make your way up to the hill where Zoltan awaits you.

In the middle of your conversation with Zoltan, you will both be surprised to see Priscilla emerge from behind a hill. She brings news that the Dudu massage convoy is leaving at dawn.

Priscilla is inquiring if she can reside with you, so the decision to allow her lies in your hands. It doesn’t make a difference since it won’t affect the mission; however, Priscilla proposed that you play Gwent together while passing the time. So ultimately, it’s up to you and your judgment on what should be done.

When the prison caravan approaches, Djikstra’s supporters swiftly cut down a tree to hinder their route. This is where the battle will commence. As the ambush comes to a close, one can observe a horse rider and his steed galloping away with Dandelion on its back.

You have two choices: take on the challenge yourself or empower Zoltan to do it while you pursue the horseman transporting the Dandelion. In this instance, I highly recommend that you go after the horseman.

Going After Horseman To Track Dandelion

Activate your Witcher Senses to uncover the footprints, then hop on Roach and follow them. Finally, you’ll stumble across Dandelion’s ring near a lake—snatch it up now before continuing in pursuit of rescuing him. Once you’ve found him, return the precious item to its rightful owner.

Following the footprints will lead you to Honeyfill Meadworks, where your eyes can get lost in pages of beautiful Dandelion poetry. After journeying for some time, you’ll eventually come across a fork with two peasants diligently working there.

When you reach this point, it is important to seek guidance from the blacksmith. However, be wary of deceptive directions – he may offer an unrelated route that leads away from your goal. Instead, make sure you take the right pathway and follow its scent trail for a successful journey ahead.

As you ascend the hill and come across cabins, be cautious not to halt unless a lifeless horse is visible. Three Halflings will be outdoors who were driven out by the Witch Hunter – follow them inside, where an individual can also be seen. Exercise precaution as your journey continues!

The Halflings will grant you access to the backdoor of their cabins, granting you clearance. However, as soon as you enter from the back door and keep pushing forward, it is guaranteed that your footsteps will take you straight into the basement, which is connected directly to the main cabin underground.

Climb to the top of the ladder, and you will find a door where Witch Hunter and Dandelion are conversing. An epic fight with Witch Hunter awaits as soon as you enter that door. When you have defeated him, Dandelion shall be freed from his clutches – then both of you may exit together to reunite Zoltan and Priscilla.

When you ask about Ciri to Dandelion, he will tell you a story known as the Breakneck Speed quest. Once this tale reaches its conclusion, the “A Poet Under Pressure” mission shall be fulfilled, and thus reward you with 1000 XP for your effort!

That’s all you need to know about “A Poet Under Pressure” quest from The Witcher 3: Wild Hunt. If you want to expand your game knowledge, consider trying Elion’s Free Plan. With it, you will receive access to helpful tips and tricks that can enhance your gameplay experience. So now go forth and be victorious.