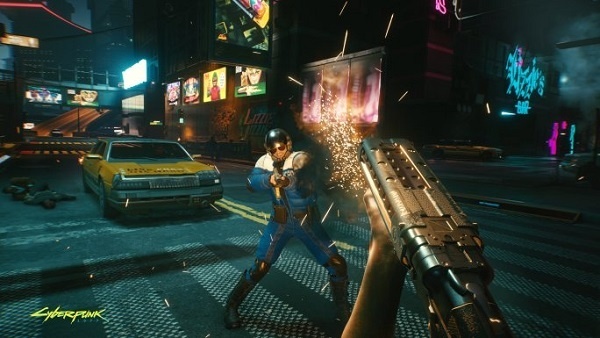 Cyberpunk 2077 beginner’s guide takes you through each and every gameplay aspect. CD Project RED worked on this game for 7 years which allowed the studio to include a ton of features. Sometimes so much content can be overwhelming but rest assured we are here with everything you need to know to survive as a Cyberpunk.

In Cyberpunk 2077 you play as V, a mercenary living in a world controlled by mega-corporations. Your character’s story is set in Night City, a city where gangs control part of the city and big corporations are the ones who decide the law. V is enhanced with cyberware but throughout the game, you use hacks to increase effectiveness during battle.

The money you earn by risking your life is used to earn cybernetic enhancements, the best weapons, and clothes to customize V.

The game’s HUD is pretty simple and delivers all the information you need to thrive. The red bar at the top left corner represents your health. There is also a blue experience gauge over the health bar which shows your character level. You gain experience by completing quests, side quests, and gigs. Once the blue gauge fills it resets and you gain one level. Once you level up you gain experience points to invest toward V’s skill trees.

Just under the health bar, you will see the Memory pool which is similar to the mana pool in other games. V can hack enemies and devices but every time memory is consumed.

In the bottom right corner, there are weapon stats for bullets and the type of weapon you are using. Over the weapon stats there you can see general controls as well as V’s current state, whether on foot in a car.

The quests and objectives are shown under the mini-map.

How to Fast Travel

V needs weapons, consumables, cyberware, ammo, and loot to complete quests in Cyberpunk 2077. Some of the items can be bought from merchants and black market dealers but there is plenty of stuff V can simply craft. To craft items in Cyberpunk 2077, you’ll need to gather crafting materials and crafting blueprints.

Get the Kiroshi Optical Scanner

Cyberpunk 2077 takes some elements from other titles such as Watch Dogs and Watch Dogs Legion. You can actually spy on other cybernetically enhance people around Night City. You can scan people and objects to receive information about them. The Kiroshi Optical Scanner is the only mandatory cyebrware in the game so you can’t progress without it.

Knowing how to handle a conversation in Cyberpunk 2077 is going to play a key role in your success. You will spend a lot of time engaging in dialogue with different characters in Cyberpunk 2077. V can respond to different questions and dialogues in multiple ways. Some of the dialogues are critical and such options are highlighted in yellow. Meanwhile, blue dialogue options give you more context of the situation and information without moving the plot forward.

Some dialogue options have a timer attached to them. These are special choices that act as important decisions in Cyberpunk 2077. Special choices use a different button to avoid unintentional selection because often they could cause a shootout.

As a Corpo, you are born into wealth inside a megacorporation. You don’t care about anyone other than yourself in Night City. However, life in the megacorporation isn’t easy, everyone is trying to take your position. Only hardened tough people can climb the ladder of a mega-corporation. You are a stressed-out mean human being but you’ll have access to the very best enhancements and money right from the get-go. That doesn’t mean life in Night City becomes easier for you, totally the opposite.

As a Nomad your life is hard and you live outside Night City. You have to take other people’s shit but you have high hopes, dreams, and ambitions. You know the badlands in and out, its clans but you love to roam free. You start with a broken car in this life path and you strive to get away from your life at the badlands to seek fame and fortune.

The ambiguous streets of Night City raised you. The city is in your blood and you are obsessed with power, fame, money, and body modifications. You know the city well and like most people here try to survive and thrive. You know where the best bars, shops, and locations are. You are aware of the most threatening gangs and shady alleyways. You are thrown into Night City with a broken nose.