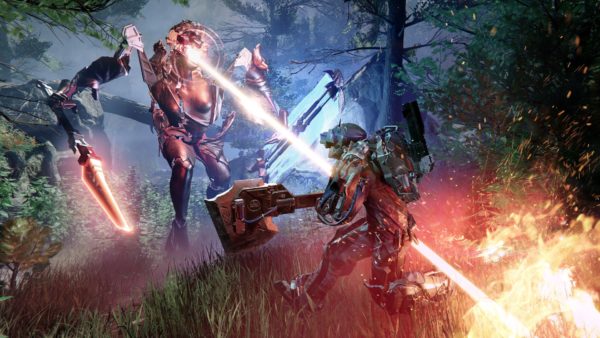 The Surge 2 Builds Guide will help you with the best builds for different situations that suit your playstyle so that you can defeat enemies and bosses more efficiently.

Having a proper build in The Surge 2 makes all the difference between defeat and victory against enemies and bosses. There are certain builds that work best against certain bosses and enemies and suit different play styles. Our The Surge 2 Builds Guide will help you with the best builds in the game.

This The Surge 2 build is designed to stun enemies by repeatedly striking them and dealing Nano Damage at the same time. The Surge 2 Elemental Archangel build can be extremely helpful against some tough enemies as enemies immune to Nano Affliction can be stunned. The following are weapons, implants and armor sets required for the build.

Armor Sets
For this build in The Surge 2, you need the Chrysalis Set and the Archangel Set. The reason why two armor sets are recommended is due to the face that the Archangel Set is obtained near the end of the game.

As for the Chrysalis Set, you can acquire is early in the game and it adds substantial Nano Affliction damage. As for the Archangel Set, it adds both Electro and Nano damage.

While you are free to use any weapon with electro damage, I would recommend a Spear or a Staff for an area of effect damage. In other words, a Spear or a Staff will allow you to stun and deal nano affliction multiple enemies at the same time.

You can also equip the following implants that help aggressive playstyle.

As the name suggests, this Surge 2 build is designed to kill bosses but, it is also very effective against normal enemies if there is such a thing in the game. The reason why this build works well against the bosses is that most of the attack with this build are harder to dodge and a staggered boss is open to your attacks.

Aside from the damage, this build also provides significant armor so that you can survive longer against a boss. The following are the armor sets, weapons, and implants required for this The Surge 2 build.

armor Sets
All bosses in The Surge 2 have an elemental attack with The Boss Killer being the most common one. That’s why you need the Liquidator Set as it will protect you against status effects and also reduces Nano Affliction damage.

However, the Liquidator Set is an operator class armor set and if you don’t have a problem taking elemental damage then consider equipping a Goliath Class armor set.

Another recommendation for this build is The Nano Ward Set which reduces the cost of blocking. You can also try the SCARAB Set as it has defensive bonuses which can be useful in a boss fight. However, the Liquidator Set is your most likely choice as the rest of the armor sets won’t become available until late game.

Weapons
There is no restriction on what kind of weapon you can use with this build in The Surge 2. You are free to experiment with any weapon you like just make sure you know the timing for directional blocking of each weapon as every weapon type has a different in directional block timing.

Implants
You need the following implants in order to make the effective use of this build in The Surge 2.

That is all for our The Surge 2 Builds Guide with tips on the best builds in the game and the weapons, armors sets, and implants required for certain builds.