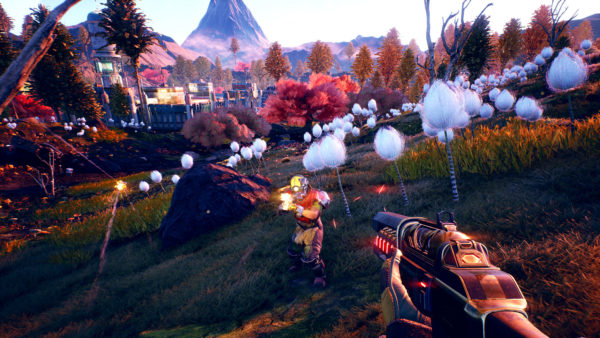 The Outer Worlds Stealth Guide will help you with the game’s stealth mechanics, best stealth perks and how to sneak.

Stealth is an important play style in an RPG. Stealth allows players to move around and trespassing into areas, where you shouldn’t be, without being detected. Our The Outer Worlds Stealth Guide will help you with how to sneak and how to perform stealth attacks. For more on The Outer Worlds also see our Inventory Space Guide and Flaws Guide.

To make your character sneak in the Outer Worlds, all you have to do is crouch. Your character makes less noise and makes it harder for enemies to notice you.

If you have a companion along with you, he/she’ll automatically crouch as soon as your character crouches. Not only that, use plants and bushes to your advantage as they’ll also obscure your character from enemies.

Level Up Stealth Ability
You can also level up your stealth ability which includes Sneak, Hack, and Lockpick skills. With these skills, you’ll be able to enter areas that you shouldn’t be entering without anyone noticing. With sneak being increased, it’ll become harder for enemies to spot you.

Solo Sneaker Perk
If you are playing without companions then you should invest in the Solo Sneaker Perk. This reduces the enemies’ detection radius by 33%. This is a Tier 3 perk so you’ll have to unlock five Tier 1 perks and five Tier 2 perks to unlock this one.

That is all for our The Outer Worlds Stealth Guide with tips on how to sneak and how to perform a stealth attack.