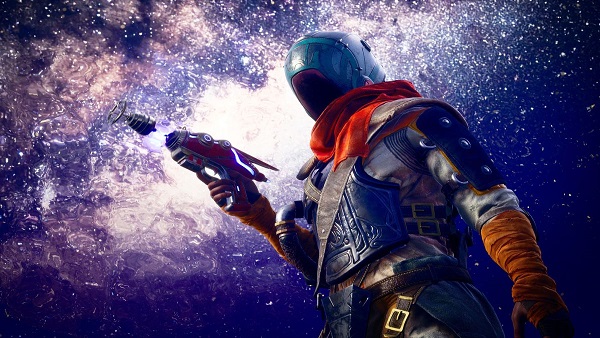 There are a total of 5 Science Guns that you can find in TOW:

These are fairly powerful weapons with built-in status effects. Plus, you can further improve their effectiveness using different Perks as seen in our Mad Scientist Build.

1. Shrink Ray
This Handgun is able to weaken enemies. To find the Shrink Ray, you need to head in the Phineas’ Lab and find it on a stand right in front of Phineas Welles.

2. Mandibular Rearranger
Mandibular Rearranger is a 1-Handed Melee weapon that has a built-in stagger effect. To find the Science Weapon, you need to head over to Scylla and to the Abandoned Mining Camp. Once there, you should be able to find it in one of the buildings – it’s inside a green box.

3. Gloop Gun
The only Heavy Weapon when it comes to Science Weapons in The Outer Worlds. You need to head to the northwest edge of Fallbrook and inside the UDL Lab. Once there, head over to the 2nd floor to find the UDL Lab Weapons Terminal Keycard sitting on a table. You should find it right next to the ringleader.

With the UDL Lab Weapons Terminal Keycard at your disposal, use it on the 1st floor. However, to acquire the weapon itself, you’ll either need 55 points in Hack or give all the correct answers:

Either have 55 points in Hack or answer with the responses above to acquire the Gloop Gun.

4. Mind Control Ray
Mind Control Ray is a Long Gun with the stagger effect built into it. To acquire the Mind Control Ray Science Weapon, you need to head over to Cascadia and inside Rizzo Secret Laboratory. You can accept the Space-Crime Continuum quest to access the lab.

Once you’re inside the lab, go to the very end of the lab where you should be able to take an elevator to the surface. Don’t take the elevator and jump across the gap on the right of the elevator to a ladder followed by another jump and a ladder.

Eventually, you should reach a dead scientist with a safe right next to him. This is where you’ll find the Science Weapon in The Outer Worlds.

5. Prismatic Hammer
You should’ve no difficulty knocking back your targets with this 2-Handed Melee weapon. To find the final Science Weapon in The Outer Worlds, you need to head over to Gladys on the Groundbreaker and purchase the Battered Mardet Datapad.

Once done, head over to customs and find Stevadore’s beds. Jump on the beds and drop down behind them to find some enemies. Deal with them quickly and acquire the Repair Hanger Keycard from the Outlaw Squad Leader. The keycard should allow you to open up the locked door containing the Prismatic Hammer.

Finding all 5 Science Weapons in The Outer Worlds will complete the Weapons from the Void and reward you with 14,000 XP.