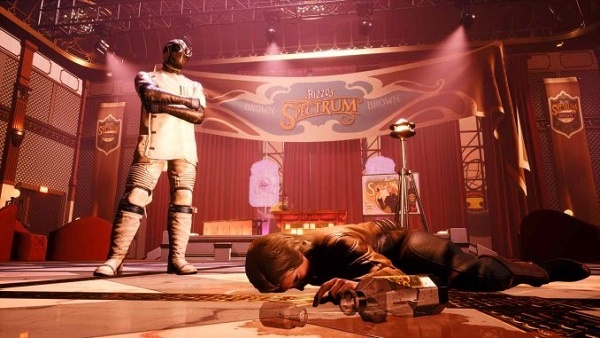 The following are the locations of all the Unique Weapons that can be found in the Murder on Eridanos DLC for the game:

All In
During the ‘Lord of Blight’ quest, head inside the SubLight Freight Storage and Processing warehouse at the Piraeus Spaceport on Eridanos. Once inside, go past the lobby and head toward the east of the main area, and turn left to find it placed along a wall of a small room. If not found during the questline, players will need to enter the warehouse from the back-entrance.

Brontide
To find Brontide, players need to head inside the Phaeton Pilothouse on Eridanos and get to the lower-section of Gyro. Once there, enter the first room after the hallway and head up the ladder on the left-hand side. Once up, check the end of the walkway to find it.

Force Magnum
Players are needed to complete ‘The Pteroray Trap’ task in order to acquire the Force Magnum.

Frigidariator
There’s a small island that players can find between the Grand Colonial Hotel and the Purpleberry Orchards. Toward the north of the island is a small room that’s got the Frigidariator weapon.

Man Splitter
To find the Man Splitter, players need to head toward the Wilderness Exploitation Reserve on Eridanos. Once there, use the Holey Caves entrance to proceed toward the west side in order to find some containers. The weapon should be on a corpse.

The Pen
Players need to complete the side quest called ‘Your Primal Heart’ to obtain The Pen as a reward.

Piledriver
To find Piledriver, players need to head over to the south of the RR&DD Labs (Purpleberry Orchards) to find a small store containing it.

Plasma Propulsion Pack
While at the Wilderness Exploitation Reserve, head to the backside of the LEGAL Hunting Supplies store to find a camp. Once there, continue to head past the campfire to find the weapon amidst some wreckage.

Recharge
To find it, players need to head over to the Distillation Station. Once there, head inside the main building and in the room with a large Rizzo’s mascot head in the center. From the area, head inside the left door and continue to crawl through crawlspaces to find it at the end.

Short Circuit
It’s located on a small island between the Wilderness Exploitation Reserve and the Grand Colonial Hotel. Once there, head inside the cave to grab a safe key from enemies. With the key in hand, return to the main island and inside a small building nearby that contains a safe with the Short Circuit.

Thunderclap
The last Unique Weapon in The Outer Worlds: Murder on Eridanos DLC can be found in the basement of the Grand Colonial Hotel. It can be accessed from the Kitchen leading to room B2.