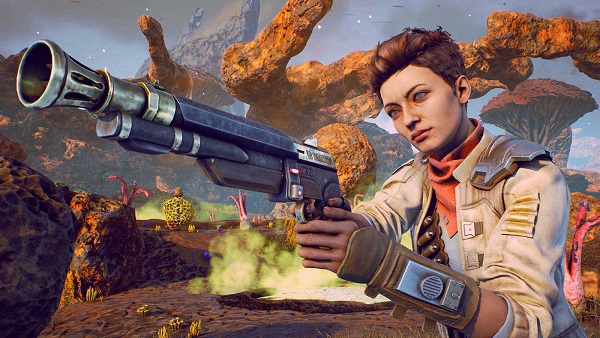 In our The Outer Worlds faction quests guide we will discuss the type of factions we have and how to complete them.

In this section of the guide, we will discuss various factions from The Outer Worlds. By completing faction quests players can gain reputation with various factions. Some companions of yours are associated with certain factions and depending on who your companion is certain faction quests will have different outcomes. Companions will lobby the player to support their faction but you do have the ability to make see things from your perspective.

There are five primary factions in The Outer Worlds and each offers its own faction quests and has its own agenda.

In this section of the guide, we will discuss various faction quests from The Outer Worlds.

This The Outer Worlds faction quest is unlocked once you complete the “Salvager in the Sky Task,” you unlock this quest.

How to complete:  Make your way to the Unreliable and navigate to Monarch, the Stellar Bay Landing Pad. Keep following the objective of the mission and locate the dead body, and loot it. Now go to Fallbrook and have a conversation with Catherine and follow the objective from there. She will order to take Clive Lumbergh, killing him or destroying the factory is going to unlock the “Slaughterhouse Clive” side quest.  Moreover, you must get the ID to access the lab but you need to Persuade, Lie or Intimidate Duncan Elley.

Entering the Passcode will give you access to Cascadia and reveal a list that takes you to Rizzo  Secret Laboratory. Simply entering the lab gets you 5000XP. Move forward that you will come across a robot. lie to the robot and use the terminal nearby to signal ADA to land, 5000XP is now yours.

Exit the room and head left to locate a room with plenty of Mantisaur. Take them down and use the terminal to align the fuel pump. There is another terminal in the room that controls  Alta-Vitae Gas transfer.

There is a room nearby with more Mantisaur and a terminal. Take the enemy down and use the Terminal. Now head in the opposite direction to take on the Mantiqueen. Once you are past the queen there is a terminal that connects the storage tanks to the landing pad. You’ll have three options here, Engineering, Hack or Overload the systems.

You need a high hack to access the terminal but you can force it to vent gas. Make sure you locate the science weapon from the “Weapons From The Void” quest first. Head to the Unreliable and speak with Lilya Hagen at Sublight to complete the faction quest and get 5000XP for your The Outer Worlds character. There are plenty of rewards to be earned here such as Sublight Salvage and Shipping Reputation, 20000XP, 2188 Bit Cartridge.

How to Complete:  At the end of Monarch after you activate the tower during the story mission, a ship is going to crash. From here on keep following the objective and locate the Module. It is up to you to decide who gets the module. You can give it to Sanjar or Graham. Depending on your decision you will have various outcomes.

How to Complete: Once you are done with Space-Crime Continuum, you will get another faction quest from Liya. Once you reach the station and have the UDL ship dock, you can pretend to trigger the self-destruct sequence. Your actions will cause the UDL captain to run away. If you want to make sure you don’t lose reputation but there is a blank keycard in the same room, use it on the terminal nearby and your faction quest will be done.

How to Complete: Talk to Graham at Amber Heights and follow the objective to free Carlotta. You can take high-capacity data cartridges or extra food. It is to be noted that there is a big choice at the end of this planet, to get the third choice for that option you need to take additional food to complete this The Outer Worlds Faction quest.

Pay for the Printer

How to Complete:  Once you are done with The Commuter you can access this faction quest. When you meet up with the group you can offer to fix the printer. The group will tell you to locate a medic, it’s to the right of the front entrance. Follow the objective and you can easily complete the faction quest. It is to be noted that there is a big choice at the end of this planet, to get the third choice for that option you need to fulfill Zoha’s request.

How to Complete: Once you are done with The Ice Palace you get this faction quest. Reach the lab and you learn that there is no conspiracy. However, there is a cover-up at work so the decision is left with you. If you tell the doctor to with you, you’ll lose reputation with The Board and fail part of the objective. If you go back to Lilya, she’s pissed off and you lose reputation with the faction.

BOLT With His Name

How to Complete:  You get the faction mission in Stellar Bay after speaking with Sanjar. Head to the facility and locate the computer inside.  Make sure to read all of the information available on the computer before you delete it. The information helps you make a crucial decision further into the game. Go upstairs the Hux will tell you around a nearby key, locate the dead body with the key and open the door. You get a positive reputation with Iconoclasts when you save the girl.

How to Complete: Complete “BOLT With His Name” to get this faction quest in The Outer Worlds. Go to Fallbrook and talk to Cathrine. Reach the Smuggler Tunnel but keep a lookout for traps. You can shoot the traps to move forward. Locate Arthur, heal him to get a positive reputation with SubLight Salvage & Shipping.

This marks the end of The Outer Worlds Faction quests guide. We will update the guide with more faction quests. In the meantime, check out our Perks,  Stealth, and companions guide.