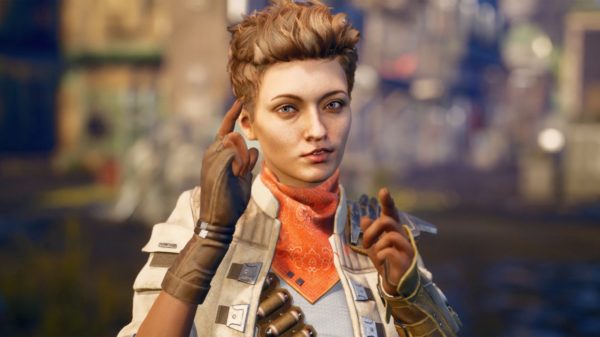 The Outer Worlds Companions Guide will help you with all of the companions that you can find in the game along with their companion quests and perks.

The Outer Worlds is the latest RPG from renowned developer, Obsidian Entertainment. Like most RPGs, the game features companions that you can take with you. Our The Outer Worlds Companions Guide will help you with all of the companion locations in the game, their perks, and quests. For more on the Outer Worlds also check our Achievements and Trophies Guide and Attributes Guide.

Before we dive into where and how to find companions, you need to know a few things. You can only have two active companions with you so chose carefully. You can swap companions if you don’t feel that a particular companion in the Outer Worlds doesn’t suit your play style.

Not only that, each companion in the game has perk bonuses and abilities. Companion perks grant bonuses to players and with each level, your companion unlocks a new perk. Each companion features a perk that grants party bonuses. This allows players to chose companions that best suit their play style.

The Outer Worlds Companions also have abelites which only unlock if your Determination skill is over 20. As you level up Leadership skills for your character the more companion abilities unlock.

Vicar Max is a priest who happens to be a hacker and a skilled fighter. Vicar has a mysterious past that unveils over time and spouts some of the best one-liners in the Outer Worlds.

To make Vicar max join your crew, just complete The Illustrated Manual quest in Edgewater. Once you return the book to Vicar, he’ll ask to join your crew in the Outer Worlds.

Companion Quest
Vicar Max has a companion quest called The Empty Man. The book you returned to him, he needs to translate it. Vicar max tells you that he knows a man who can translate. This quest will take you through from the Groundbreaker to Scylla. Completing this quest also reveals a bit about Max’s past.

Perk Bonuses
Vicar Max has perk bonuses of his own which are as follows.

Parvati is another of the unique companions in The Outer Worlds. This companion is naïve and always looks for the best in people. Aside from that, she’s an engineer and wields a two-handed hammer that deals a lot of damage.

To get Parvati as your companion in The Outer Worlds, go to the Cannery in Edgewater as part of the main quest. After that, Parvati will become available as a companion.

Companion Quest
Pavarti will give you the Drinking Sapphire Wine companion quest in The Outer Worlds. The quest is about Pavarti having a crush on Junlei Tennyson, captain of the Groundbreaker, so help her.

Perk Bonuses
Pavarti has some interesting perk bonuses in the game.

Ellie is a pirate that joins your crew after you help her on Groundbreaker. She also has a mysterious past and doesn’t like to talk about it. Not only that, Ellie’s companion quest is the hardest one to unlock.

To recruit Ellie as your companion, complete the quest Worst Contact on Groundbreaker. After the quest is complete, Ellie is available as a companion.

Companion Quest
The Low Crusade is the companion quest for Ellie. Just make sure Ellie is equipped as your companion while you visit Byzantium. The quest involves visiting her parents.

Perk Bonuses
Like all of the companions in the game, Ellie also features unique perks.

Another interesting The Outer Worlds companion, Felix longs to experience new things due to being stuck on the Groundbreaker. Not only he supports you in combat but occasionally will also make you laugh. To get Felix as your companion in the game, he’ll show up at your ship while you leave Groundbreaker for the first time.

Companion Quest
Friendship’s Due is the companion quest for Felix. The mission involves an old friend of Felix who messages him to join a revolutionary project.

Perk Bonuses
Felix also has interesting perks of his own.

While she has a drinking problem but it doesn’t stop her from kicking ass in combat. She is most useful in Monarch as she knows almost everyone and has information about certain groups and locations. Like other companions in The Outer Worlds, Nyoka also has a mysterious and tragic past which unravels as your progress.

To get Nyoka as your companion, during a main quest, you’ll need her to track down Hiram Blythe. After that, she’ll be available as a companion in the game.

Companion Quest
Nyoka’s companion quest in the Outer Worlds is the Star-Crossed Troopers. This involves tracking down members of her lost crew and collecting mementos.

Perk Bonuses
The following are the perks you get while having Nyoka as your companion.

While SAM can be seen as the Claptrap of The Outer Worlds but, he’s much more useful and can be deadly in combat. SAM is in the closet near the crew quarters on the Unreliable but it won’t be available as a companion until you complete its companion quest.

Companion Quest
SAM’s companion quest is the Cleaning Machine. This quest requires you to get SAM running again. You need to replace its S.U.D.S. Sleeper with an Acid Sleeper, Acid Sleeper is in the storage facility in Roseway.

Perk Bonuses
The following are the perk bonuses you get while having SAM as an active companion.

That is all for our The Outer Worlds Companions Guide with tips on all companion locations, how to acquire them, their quests, and perks.