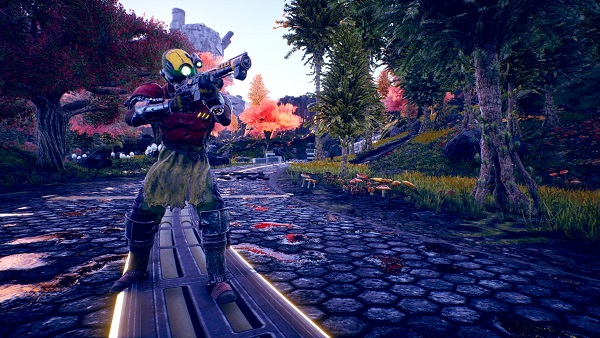 The Outer Worlds Perks Guide will help you with how the perk system works in the game along with the best perks available in the Outer Worlds according to their Tier.

For more on The Outer Worlds also see our Companions Guide and UDL Lab Weapons Keycard Location and Answers Guide.

In the Outer Worlds, perks unlock every two levels or every time you take a flaw. Given that you the game have a level cap of 30, you’ll have a total of 15 perks by the end, considering if you don’t take any flaw.

With that out of the way, It’s time to look at the best perks in the Outer Worlds.

Given that you’ll have only 15 perks by the end of the game if you don’t take any flaw and only rely on leveling up. With that in mind, the following are the best The Outer Worlds Tier 1 perks that are a must-have.

Toughness
This perk increases your character’s health by 50%. If you don’t unlock this perk, then by the end of the game your character will have 3500 health. If you take the Toughness perk then your character gains 5250 health.

This means, your character will have a significant amount of health by the end of the game with this perk. This perk is sited for every build type so don’t forget to use it.

Lone Wolf
If you don’t like taking companions with you and like to travel alone then this is the best perk for you. This perk increases damage by 25% when you are alone.

This perk is best suited in SuperNova difficulty where companion death is permanent and players will likely leave them on the ship.

Pack Mule
If you don’t like managing your inventory then grab this perk as it’ll do that for you. There is a lot of loot in The Outer Worlds and your character can get easily overloaded. This perk automatically manages the inventory so that you don’t have to stop every 10 minutes to sort your inventory.

Harvester
This perk restores 15% health on each kill, meaning you’ll heal every time you kill an enemy. Combined with toughness, you’ll have a lot of health which can be restored with each kill.

Weird Science
Science weapons are one of the best weapons in the game. If you like using science weapons then this perk is for you.

The Reaper
For players who like to use Tactical Time Dilation as it restores 25% of it with every kill. However, this perk will only benefit you if you are facing a group of enemies.

With five Tier 2 perks unlocked, you’ll have access to the Outer Worlds Tier 3 perks. The following are the best Tier 3 perks in the game.

Armor Master
This is the best Tier 3 perk in the game. This perk grants a 10% bonus to armor and a 100% skill bonus. However, if you have Chimera equipped then you get addition +10 lie, +10 Intimidate, and +10 persuade.

Revenge
This perk increases your damage by 20% if your character is affected by a Combat effect. Meaning, if you are poisoned, burned, or shocked, then your damage will increase.

Tit For Tat
This perk in the Outer Worlds converts 15% of the melee damage you deal to enemies into health. Obviously, this perk is only useful if players are using a melee build. Every swing of your melee weapon will heal you.

Wild Science
This perk further increases Science Weapon damage by 50%. Science weapons are one of the most powerful weapons in the game and this perk increases their damage significantly.

That is all for our The Outer Worlds Perks Guide with tips on the best perks in the game.