RespawnFirst
Home News The Longing Encourages Players to Walk Away 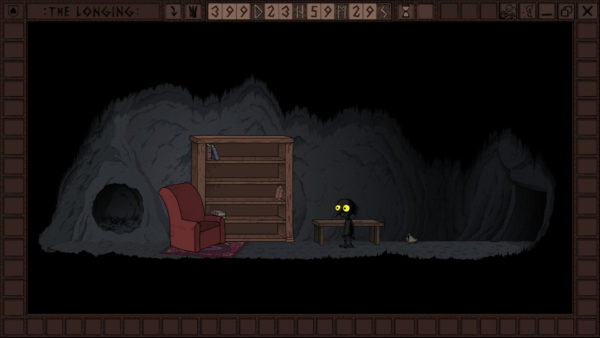 The Longing is a game that doesn’t care if you play it,  you can actually go ahead and uninstall it, never leave the starting area – but if you still come back after a year or so, and still watch the game’s ending.

Once the player has witnessed the game’s opening, saw the creation of your character by an ancient king who then turns to stone, the game goes on with or without you.

Once the king turns to stone the countdown begins. It takes exactly 400 days for the king to return to life and his words will end The Longing, will end 400 days of solitude. These 400 days will play out in real-time, says designer and artist Anselm Pyta.

Why create something like this? Well, The Longing is trying to solve the biggest problem with idle games; games like Progress Quest and Clicker Heroes are fun to play until you realize you’re never going to finish them. But that’s not the case with The Longing, you can walk away whenever you want and still come back for the ending. No matter what you do, the game will end in 400 days.

The game has four endings depending on what you do; you can be a diligent servant to the king, try to escape the situation, or simply leave the game and come back in a year.

Multiple endings may seem like an odd choice for such a title since they are designed for us to return and play the game again but that’s pretty much the opposite of what Pyta wants. The Longing’s use of time is intended to lend the finale some emotional heft, a way to communicate your character’s loneliness and to make revisiting the ending an unappealing prospect.

I hope that players don’t feel the need to play everything again, because in this case it’s kind of absurd. It’s too masochistic

Since it takes so long for the game’s ending to happen, it puts a lot of pressure on the final moments. Whichever ending you get will probably be the definitive one for you.