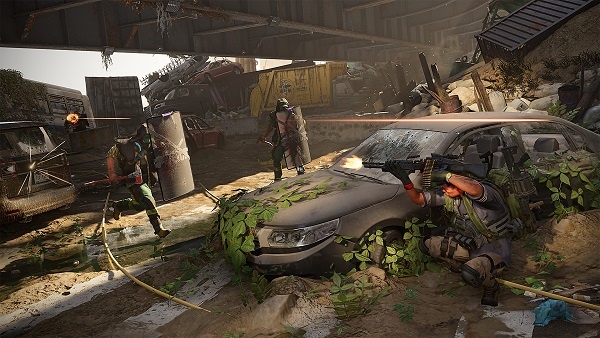 SHD Tech Cache #2
For this one, players will need to head to the northeast edge of the university. The area is between the starting settlement and courthouse subway safehouse. Once players find themselves under the highway bridge with “NYC Paint Shit” painted on it, drop into the manhole. Players will need to continue all the way to end but instead of taking the exit ladder, head inside the door on the left side.

Once inside, players will need to proceed to the locked door on the other side, and shoot the panel with the red light through the glass in the door to unlock it. A little ahead, shooting the padlock on the door will unlock it and take players to another area of sewers with an elite enemy ahead.

Players need to kill the elite, get the “Utility storage key” from his body, and open the nearby locked door to get the SHD tech cache.

SHD Tech Cache #3
This one is a little hard to find, which is why we advise agents to collect it during the daytime. To get it, players will need to head to the north side of Columbus Park, near a few small Chinese restaurants, and head inside the alley. Shooting the rope above on the left side will cause it to drop, allowing players to head to the topside.

From there, players will need to take the ladder down and kick a couple of large panels to continue ahead. Eventually, players will find themselves outside a locked door. Shooting the yellow panel on the white buildings behind should unlock the door and reveal the SHD cache in a corner of the second room.

SHD Tech Cache #4
This one is fairly simple to find. Players will need to proceed to the northeast edge of the Civic Center to come to a dumping site with abandoned trucks and large containers. Climbing the white truck parked right next to some black containers will reveal another SHD cache.

SHD Tech Cache #5
To get the last SHD cache in Civic Center, players need to head to the north side of the map (east of Columbus Park) to come across a Chinese restaurant that says “Noodle Shop” on a red banner. The cache should be upstairs behind a fenced gate.

These are locations of all the SHD tech caches in Civic Center found in the Division 2 Warlords of New York. For more help on the game, feel free to check out our the Division 2 wiki.