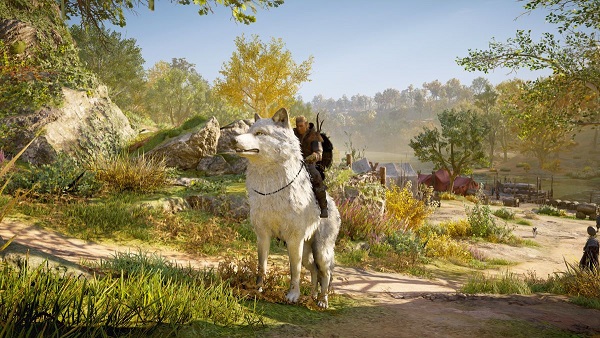 To find The Devout Troll quest in Assassin’s Creed Valhalla visit Grantebridgescire. Locate a holy man sitting on a stool outside his house.

Objective #1 – Speak with the Monk

As you get near the Monk he will start to speak to Eivor, asking them to leave their barbaric ways behind and follow the one true god. The monk will explain more about him and his past, and how he too was once consumed by his anger. However, he is free from his past and his anger and his soul belongs to the one true God. You can keep talking to him but the quest isn’t explained very well so you won’t know exactly what to do.

Inside the house, there is a locked door but you can’t find the key anywhere. The key is actually under the Monk as he is sitting on it. You need to find a way to make him stand up.

Break everything inside and around the house. Find every breakable object and destroy it but the Monk will say that he feels nothing. He has no attachments to his worldly goods. There is cow nearby, kill the cow but it would still not have any effect on the Monk. The next step is to light the house on fire with fire arrows. Shoot the fire arrows at the roof of the house. Lighting up the house will make the Monk stand up.

Grab the key from under the monk and go to the door. The Monk will follow you but he won’t attack. Open the door and loot whatever you find inside. When you come outside the Monk will be enraged and attacks you. Deal with the Monk to complete The Devout Troll in Assassin’s Creed Valhalla.

If you need more help with Assassin’s Creed Valhalla visit The Baker’s Plaint walkthrough, and The Stink Brew walkthrough.