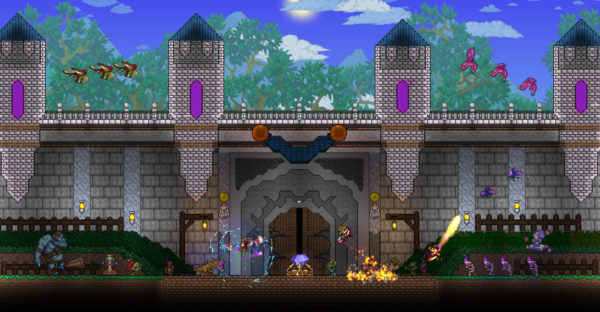 Terraria PC is facing errors and issues like the crash at launch, black screen, stuttering, Graphics Card Not Found, Tmod Error, and more. Here I have compiled a list of errors and issues with the game along with their fixes and workarounds.

Terraria Stuttering, No Audio, And Fixes

Terraria has been going strong ever since it launched. During that time, devs have ironed out a lot of errors and bugs. Despite that, the game is still facing errors and issues like crashes, black screen, Graphics Card Not Found, and more.

The following are the errors and issues that Terraria players are experiencing along with their fixes and workarounds.

According to Terraria players, when they launch the game they get the following error.

This error is mostly popping up for those playing the game on a laptop. The error is occurring due to the laptop running the game on the integrated GPU instead of the dedicated one. This can easily be fixed.

For Nvidia GPU users, open Nvidia Control Panel > Manage 3D Settings > Program Settings > select the game. Under the first step, select Non integrated GPU. Apply the change and the game will always run on the dedicated GPU. This will fix the error.

For AMD users, this can be done in Device Manager. Under display adapters, disable the integrated GPU option.

This is one of the complicated errors that Terraria players are experiencing. It’s not complicated in terms of solution, just in terms of how long it is. According to players, they are getting the following error.

Terraria players are reporting that when they launch the game it just crashes at startup. Here are a few fixes that will help you fix the issue.

Lack of administrative rights is another reason for Terraria to crash at startup. Right-click the game’s exe > Properties > Compatibility tab > check “Run This program as an administrator”. Run the game and it will work just fine.

General performance issues like FPS drops and stuttering are common in PC games and Terraria is no exception. Disable in-game vertical sync and open Nvidia Control Panel > Manage 3D Settings > Program Settings > select the game > set Vertical sync to “On”. This will fix the stuttering issue with the game.

However, if the stuttering isn’t fixed then follow the steps mentioned above but set Vertical sync to “Fast”. This will not only fix stuttering but will also give you a potential FPS boost.

Players are reporting that they aren’t getting any audio or sound while playing Terraria. Windows Sonic For Headphones is likely the issue here. On Win 10 open Settings > System > Sound > Sound Control Panel(to the right). Select your active audio device > properties > Spatial Sound tab > select “off” and apply. This will fix the no audio issue with the game.

Black screen at launch is a common issue with PC video games. According to players, when they launch the game, they get a black screen while they can hear the audio in the background.

Launch the game and when the black screen appears, press “Alt + Enter”. The game will go into Windowed mode and will start to display. Go to the video settings, set the resolution matching your display and you’ll be able to play the game in fullscreen.