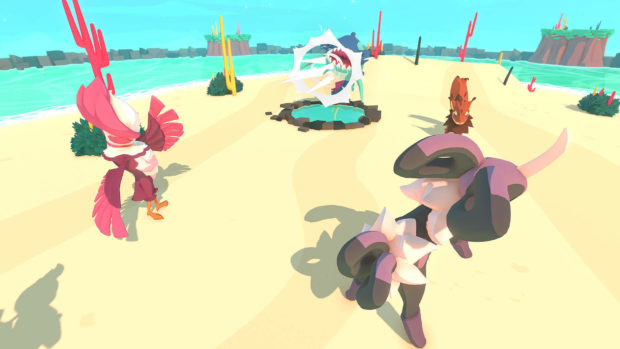 It was only a matter of time before some created a strong Pokemon clone on PC and today, we have it. Temtem is out and it is as close to Pokemon as one can get on PC right now. The game employs pretty much the same mechanics as Niantic’s title. The battle system is all based on strategy so it’s important that you learn all about the best moves and competitive techniques to use in Temtem. In our Temtem best moves and competitive guide, we will take you through the best moves and strategies you can use to boost your chance of winning.

When it comes to Temtem the more you know the better, there is no role of Critical hits. Knowing what moves to use can help you figure out what party members complement your style of play and strategies.

When we look at high damage moves they come under Special or Physical types. The Special category uses the attacker’s SP ATK and the defender’s SD DEF for damage calculation. Each of these has “Types” assigned to them such as Fire, Digital, and Toxic. Your move’s damage goes up 50% if the attacker’s type matches the move. This is the same type of attack bonus damage and it is a highly useful factor, best to keep this in mind when using your moves.

You should also know about Status techniques that don’t deal damage. However, Status Techniques can lower or increase the stats of the user or the target. They can also inflict status effects such as  Asleep or Exhaust.

Last but not least we have Synergy moves that can fall into any of the three main categories.  Synergy attacks allow you to gain additional effects but only when used with a compatible partner. The partner must be present on the battlefield. Consider them combo moves that can deal significant damage. Now let’s look at the best Temtem moves.

This isn’t the fastest of moves in Temtem but its 0 Hold time makes it a really powerful attack, especially when paired with Fire-type Temtem. Moreover, have the right synergy and this attack and the attack can burn the target for two turns. Burn effect doesn’t do much damage on its own but the ATK reduction can cripple sweepers just long enough for you to take them down. Here’s a tip, Mudrid/Vulcrane combo can do well. Temtem who can learn this move are Tateru, Bunbun, Mudrid, Vulor, Vulcrane.

This is a great move to perform when using Skunch, his significant base power gets a boost from traits such as Ninja Jutsu which hits hard and fast. It isn’t easy to resist the attack so its a sure-fire way to deal decent damage. The move is really useful against Mental-types as they have low DEF stat so using Ninja Jutsu can know them out of the field before they can move. Wait for Hold duration though and you are good to go. Apart from Skunch other Temtem have access to Ninja Justu as well but they may not deal with as much damage. Temtem you can use this use are Skunch, Tental, Valash, Gyalis, Saipat, Shuine, Vulcrane.

While this is a one damage move it can be highly useful for a strategist. You can Wake Up your buffed Temtem and catch the opponent off-guard and there is a chance that the “Very High” priority makes you go first rather than last.

Pair this with a Nature-type Temtem and the Exhausted effect lasts an additional turn and your move deals even more damage to the enemy. Synergizing with Nature is for getting the most out of Energy Manipulation won’t require a double Mental team which helps avoid wrong type match-ups.

Hallucination offers perks with and without Synergy effects. It can do a two-turn Exhausted effect and gains 50% power with a Mental Temtem in your party.  Nidrasil who is a Nature/Toxic type Temtem can learn this move.

Mix this with a Mental Temtem with Energy Manipulation to do a two-turn Exhaust on the entire opposing team in a single turn, and deal a lot of damage. The cost is high but the result is worth it. Temtem who can learn this are Nidrasil, Myx, Noxolotl.

This move is one of the best because it has the highest power. There aren’t many Temtem that can learn this move and those who can don’t have a high SP ATK. But those who do have access to it aren’t Melee-types making, which means you can bait and switch.

Your enemy won’t expect a non-Melee type enemy to have a Melee attack. Temtem who can learn this move are Tateru, Skunch, Mushi, Mushook, Baboong, Adoroboros.

This is the best Wind-type move in Temtem thanks to its 145 power. There is only one major weakness and comes with a lot of resistance that makes it a powerful move.  The cost is a lot but use it with Barnshe (with air specialist) or Granpha and the move will destroy everything.

If you use a Water/Earth team you can trick your opponent since Earth types are slow but you can use Flood as it reduces the target team’s SPD by one stage but that goes up to two stages when pared with an Earth Temtem. Temtem who can learn this move are Platypet, Platox, Platimous, Pewki, Piraniant, Umishi, Ukaka, Oceara, Shuine, Kalabyss.

Bamboozle can protect you from the next technique to target you. You can protect yourself from anything regardless of the attack and the Temtem type. Have Goolder as your Bamboozle Temtem as its large HP and low defense really makes it tough to beat when paired with Bamboozle. Temtem that can learn this move are Barnshe, Goolder, Pigepic.