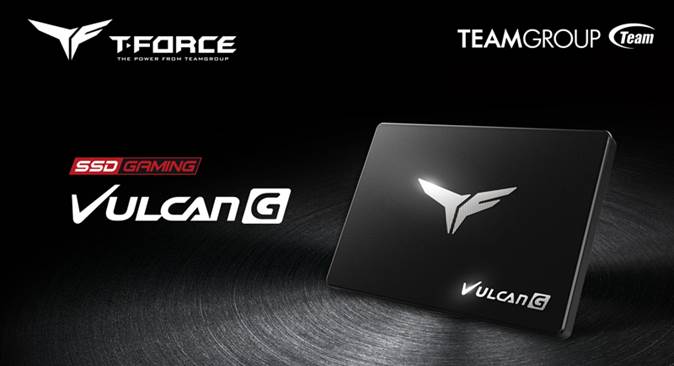 TEAMGROUP announces the T-FORCE VULCAN G, a Gaming Solid State Drive. With the SATA interface and 3D NAND flash memory, the read and write speeds can reach up to 550MB/s and 500MB/s, which offers 4 times faster read/write speed than traditional hard drives. It also supports SLC caching and Windows TRIM optimization commands, making it the best choice for upgrading your gaming PC!

The T-FORCE VULCAN G Gaming Solid State Drive has a minimalist design. The T-FORCE logo is printed with a unique diamond-cut pattern for a sophisticated and sleek look.

It is also available in capacities of 512GB and 1TB and uses the SATA interface and 3D NAND flash memory chip, making it 4 times faster than traditional hard drives in read and write speeds. With up to 550MB/s and 500MB/s, gamers will experience a significant performance jump.

The built-in Error Correction Code and Wear-Leveling technology prolongs the service life of SSD and improve the reliability of data transfer, allowing gamers to easily upgrade and enjoy the performance upgrade!

As a leading provider of memory storage products and mobile applications to the consumer market, Team Group Inc. is committed to providing the best storage, multimedia and data sharing solutions.

All TEAMGROUP’s memory module products come with a lifetime warranty, repair and replacement services. Team Group Inc . also listed company at the stock exchange market in January 2019. In 2016, TEAMGROUP established T-FORCE gaming series which including all the gaming memory modules.

Let us know what you think about the TEAMGROUP T-FORCE VULCAN G and whether or not this is something that you might be interested in getting for yourself.