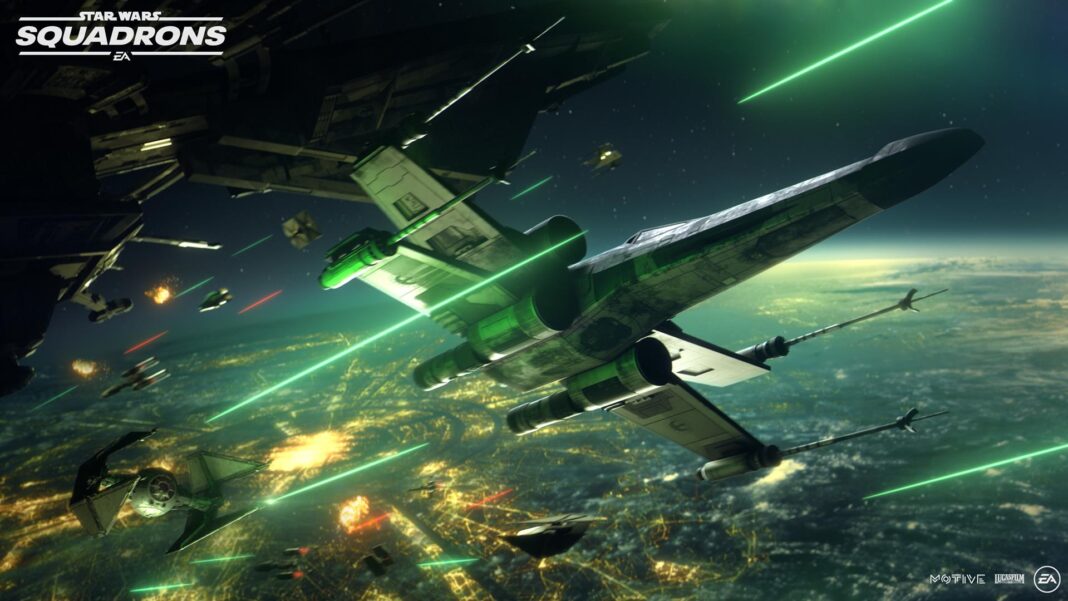 Star Wars Squadrons PC is facing errors and issues like HOTAS not working, Crash At Startup, in-game crash, DXGIGetDebugInterface1 Not Located, Error Code: 10011, black screen at launch, Error: 0xc000007b, and more. Here I have compiled a list of errors and issues that PC players are experiencing along with their fixes and workarounds.

Star Wars Squadrons is the latest in the Star Wars titles from publisher EA. The game allows players to fly and fight enemies in iconic Star Wars ships.

While the game is optimized but, Star Wars Squadrons PC players are reporting errors and issues with the game like HOTAS not working, in-game crash, crash at launch, HOTAS not remapping, unable to bind pedals, DXGIGetDebugInterface1 Not Located, Error Code: 10011, Error: 0xc000007b, and more.

Star Wars Squadrons is all about flying iconic Star Wars ships and what better way to fly them but with a HOTAS. However, a lot of players are reporting that either HOTAS isn’t working at all or if it is, it’s not working properly. Here is how to fix these HOTAS issues.

One reason for the HOTAS to not work could be that you have plugged in a lot of peripherals. Unplug peripherals that you aren’t using and then plug HOTAS back in and it should be working.

If the issue continues to persist then go to your Steam library > right-click Star Wars Squadrons > under “Steam Input per-game Setting” select “Forced Off”. Click ok and this should get HOTAS working with the game.

In case HOTAS is still isn’t working, go to Steam > Settings > Controller > General Controller Settings. Uncheck “Generic Gamepad Configuration Support” and press OK. Launch the game and go to options > controls and scroll down to the bottom of the list and you should see HOTAS listed there. This will get HOTAS working with Star Wars Squadrons.

Those of you facing the issues with HOTAS which doesn’t allow them to remap controls or bind pedals, here are the fixes. Those of you unable to remap buttons, first right-click Star Wars Squadrons in Steam library > under “Steam Input per-game Setting” select “Forced Off”. Then follow the steps mentioned in this video to remap your HOTAS buttons.

As for those who can’t bind pedals, launch Star Wars Squadrons with throttle unplugged. This will allow players to bind pedals and once you are done. Close the game and launch it again with everything plugged in.

However, the modification depends on the player itself. For us, the Button 47 was z-axis(-) and we had to do trial and error to find that 46 was z-axis(+). This should fix the HOTAS issues with Star Wars Squadrons.

Some PC players are reporting that they are facing installation issues with Star Wars Squadrons on Epic Games Store. Here is how to fix it.

Players are reporting that Star Wars Squadrons is crashing at startup or not launching at all. There are multiple reasons behind Star Wars Squadrons crash at launch issue like your anti-virus, missing important Visual C++ files, and more. Here are the fixes.

Those of you facing the crash at launch issue on Windows 7 and 8, you are out of luck as Star Wars Squadrons only supports Window 10 64-bit. For some players, the game might work on Windows 8 64-Bit but, even that isn’t guaranteed.

One reason for the game to crash at launch is the lack of admin rights. Right-click Star Wars Squadrons’ exe > properties > Compatibility tab > check “Run this program as administrator”. Apply this change and the game should be working normally.

Your anti-virus/Windows Security might be blocking important games files. Either disable real-time protection or exclude the game’s install folder from it. After that, verify game files and Star Wars Squadrons will stop crashing at launch.

If players get an error similar to “vcruntime140_1.dll Was Not Found”, then players just need to download and install Microsoft Visual C++ Redistributables both x86 and x64 versions. This should get the game working.

Players are reporting that when they launch Star Wars Squadrons they get the following error.

“The procedure entry point DXGIGetDebugInterface1 could not be located in the dynamic link library dxgi.dll”

This error is being faced by players who are trying to play the game on Windows 7 and apparently, the game doesn’t support legacy OS. Players need to upgrade to Windows 10 to play the game.

However, if you can’t upgrade or stuck with Windows 7 then there is are fixes that MIGHT work for you. Go your Steam Library > right-click Star Wars Squadrons > properties > Local Files tab > click “Browse Local Files”. Create a shortcut of the exe to the desktop. Right-click the shortcut > properties > add “-novendordevice” in the target text field. Hit ok and the issue will be fixed.

Another fix would be to go to the game’s install folder by following the steps above. Delete the “GFSDK_Aftermath_Lib.x64.dll” file and launch Star Wars Squadrons on Win7 and it might just work.

There is another fix for this error. Follow the steps mentioned in this link and the DXGIGetDebugInterface1 Not Located error will be potentially fixed.

This is another Star Wars Squadrons error that PC players are experiencing. The “Error Code: 10011 (Failed to start the game)” error is being caused by the easy anti-cheat and here is a potential fix for this error.

Vive Pro users are reporting that they are unable to play Star Wars Squadrons with the following error message.

This can be fixed bu launched the game without VR and setting the display mode to Windows Borderless. Apply this and players will be able to Star Wars Squadrons on Vive Pro.

Star Wars Squadrons PC players are reporting that the game is crashing randomly while playing. There are multiple reasons causing the game to crash and here are the fixes.

One reason for Star Wars Squadrons to crash in-game is the use of third-party tools and software like MSI Afterburner. Disable any third-party tools you are using along with Steam overlay and GeForce Experience overlay.

If the issue persists, then your GPU might be the culprit. It’s either overclocked or old. If the GPU is overclocked then revert it back to its default GPU clock even if it’s factory overclocked.

If the GPU is old or you don’t want to mess with the GPU clock then players can try capping the game’s FPS. Open Nvidia Control Panel > Manage 3D Settings > Program Settings > select “Star Wars Squadrons”. Turn on “Max FPS Limit” and set the value to 30. Apply this change and the game will be locked at 30 FPS. This will reduce the GPU and CPU load and will keep the game from crashing.

A lot of players are reporting that they are unable to play Star Wars Squadrons as they only get a black screen when they launch the game. Here is how to fix it.

Go your Steam Library > right-click Star Wars Squadrons > properties > Local Files tab > click “Browse Local Files”. Create a shortcut of the exe to the desktop. Right-click the shortcut > properties > add “-window” to the target text field and apply. This will force the game to launch in Windowed mode and the black screen issues will be fixed.

Star Wars Squadrons PC players are reporting “Error: 0xc000007b” and they are unable to play the game. This error can be easily fixed by installing the latest Visual C++ Redistributables both x86 and x64 versions.

Performance issues are common among PC games and apparently, Star Wars Squadrons is no exception as players are reporting errors and issues like stuttering and low FPS. Here is how to fix these performance issues.

First, make sure you have installed the latest GPU drivers. Open Task Manager and check if there is any process that is using too much CPU, CPU, or HDD. End the process if it’s using too much of your PC resources.

Launch Star Wars Squadrons and disable in-game v.sync and close the game. In my experience, in-game v.sync can cause stuttering so we’ll force it through the GPU driver. Also, turning on the v.sync is important because, at the time of writing, the game stutters when played at unlocked FPS. Open Nvidia Control Panel > Manage 3D Settings > Program Settings > select the game. Make the following changes.

Apply these settings and Star Wars Squadrons’ stuttering issue will be fixed.

That is all for our Star Wars Squadrons fixes for errors and issues like HOTAS not working, can’t remap HOTAS, unable to bind pedals, Error: 0xc000007b, SteamVR Failed Initialization, and more. If you are facing errors and issues with other PC games or your PC then also see our hub for commonly occurring PC errors and their fixes.