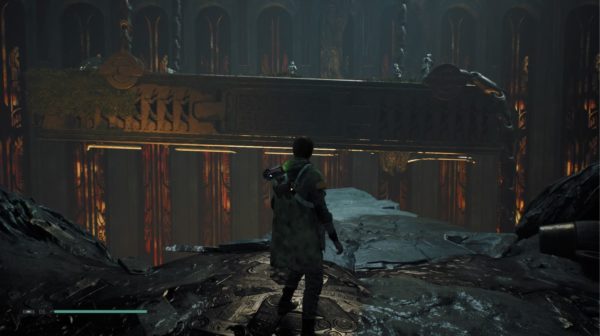 The Tomb of Miktrull in Star Wars Jedi: Fallen Order is one of the main story areas. To progress further into the story it is necessary that you complete the tomb. The tomb consists of tricky puzzles that you have to pass if you want to complete the tomb. This guide will include all the details and tips on how to progress through the tomb by completing puzzles.

Upon entering the Tomb of Miktrull go straight to encounter a wall that needs to be broken down by using Force Push. After that proceed further into the tomb and head down to encounter an enemy. After eliminating them go ahead to come across your first puzzle.

You will spot a spinning tower that can push walls in and out. There are buttons here which you can interact with. Go ahead and press the button which will cause the four walls to come to the center. Go straight down the path and take a left to arrive at some vines which you need to climb. After climbing up you will come upon a new platform.

Keep going through the narrow pathway until you reach another area with buttons and moving walls. Press the button and use Force Slow to get through to the vines, climb up and go to the area on the left. The walls move too fast for you to pas through using Force Slow is the only option.

Go straight until you arrive an area blocked by wooden branches. Don’t bother using Force Push on the branches because you know that ain’t gonna work. Instead, go to the center and press the button there to burn the branches.

Proceed further and you will come across two enemies this time. Defeat them to acquire the Force Power skill which is useful as it enables you to control and move around heavy objects. Go ahead to reach another area blocked by wooden branches. Use your skill to throw the fire spheres at the branches and proceed to the end of the tomb.

That is all for our Star Wars Jedi: Fallen Order Tomb Of Miktrull Guide. If you are interested in learning more about the game then be sure to check out our guides on how to beat the legendary beasts in the game and where you can get stims.