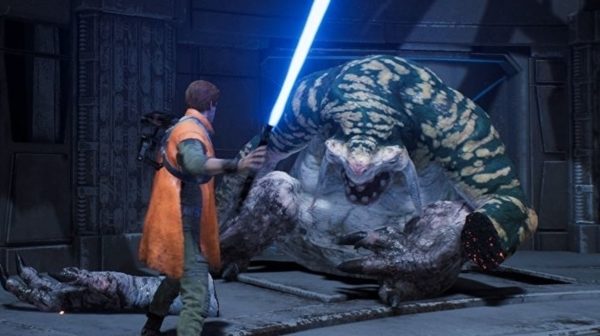 Rabid Jotaz is one of the hardest optional boss fights in the game. Most people, because of the difficult boss battle and the fight being optional, don’t engage in the fight at all. This guide will include all the details on the boss fight with Rabid Jotaz in Star Wars Jedi: Fallen Order and where to find Rabid Jotaz.

Rabid Jotaz is one of the four legendary beasts in Star Wars Jedi: Fallen Order. It is located on Planet Zeffo which can be accessed after completing Bogano. Go to the Crash Site where the Star Destroyer crashed. A Jotaz will be at the centre of the site ignore it and climb the platform on the left.

Jump down to the area where the beast is roaming and face it. Rabid Jotaz doesn’t have much health on him and can be taken down quicker then you can imagine. Even though the fight can be quick nobody said the fight would be easy. Rabid Jotaz has three attacks that it uses in the whole fight.

The first one is a three-step combo which is a blockable move but still is very risky to block as it drains stamina. We recommend that you try dodging and deflecting its three-step combo. As I said earlier by the time you block the third step in this combo you might not have much stamina left and might take quite some damage.

The best time to attack is to counterattack when it’s attack finishes. It will be in it’s recovering state and you can get in a few hits. The second attack is an unlockable charge. Before the attack, Rabid Jotaz roars and then charges at you and slams the ground. This attack is quite easy to dodge by rolling sideways as you can know the attack is coming when it roars. You can also counterattack after the successful rolling.

The third attack is another blockable attack in which Rabid Jotaz leaps towards you to close the distance and then swing its arms at you. Try dodging or deflecting this attack to save stamina.

After counterattacking after most if it’s moves it will go down in no time because of its low health as compared to other bosses. Dodging and Deflecting are very useful in this fight so use them to the max potential.

That is all for our Star Wars Jedi: Fallen Order Rabid Jotaz guide. If you are interested in learning more about the game then be sure to check out our guides on how to beat the legendary beasts in the game and where you can get stims.