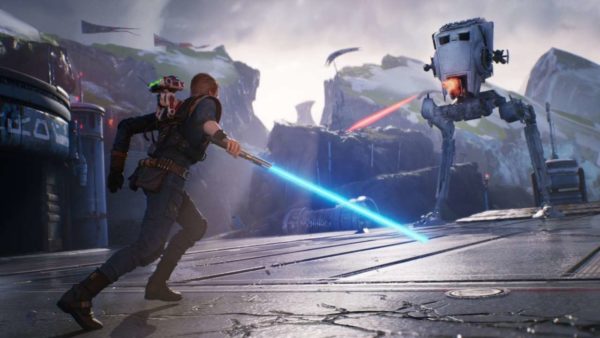 Star Wars Jedi Fallen Order has two modes like most PS4 Pro games, performance and resolution. The resolution mode locks the game at 30 FPS with a higher resolution. The game holds 30 FPS quite easily with occasional single frame drops.

The performance mode drops Jedi Fallen Order’s resolution to 1080p with 60 FPS. As I mentioned above, the game holds a solid 60 FPS. What’s interesting is that Star Wars Jedi Fallen Order on PS4 Pro doesn’t drop below 60 FPS even during heavy combat sections. The only time I noticed a drop in the frames per second was when I entered a new area in the game.

Meaning the only time you’ll notice FPS drop in the game when the game is loading a new area and after a few seconds goes back to stable 60 FPS. This isn’t surprising since Respawn Entertainment also did an excellent job optimizing Titanfall 2, which was a 60 FPS title on base consoles.

This indicates that the studio has implemented lessons learned from their prior games to optimize Star Wars Jedi Fallen Order. I can only assume how well Jedi Fallen Order runs on Xbox One X, which is significantly more powerful than PS4 Pro.

Seems like the game will be a solid performer even on base PlayStation and Xbox One given the level of optimization. However, PC players are worried as Jedi Fallen Order system requirements are quite demanding.

The game requires GTX 1070, 16 GB RAM and a Core i7-6700K. However, these requirements could be for playing at the game at 4K resolution. We’ll update you on the Star Wars Jedi Fallen Order’s PC performance once we get to play it.

Star Wars Jedi Fallen Order is an action-adventure game developed by Respawn Entertainment for PC, Xbox One and PlayStation 4.