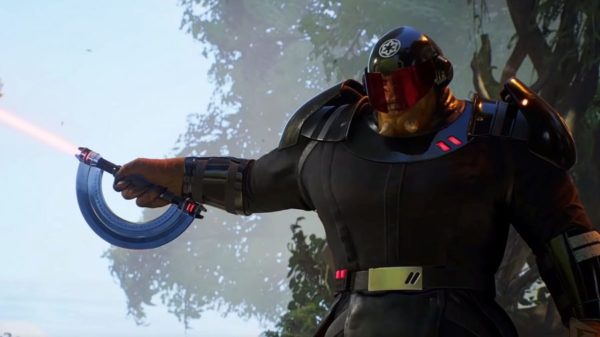 The fight with the Ninth Sister takes place on Kashyyyk in one of the main story missions. Your goal is to reach the top of the Origin Tree but the Ninth Sister will intervene. Thanks to the Shoyyyo Bird you will be saved for by her attack for the time being. When you finally get to the top of the Origin Tree you can see an area where you can jump down. Here the fight with Ninth Sister will begin. There are two phases in this fight both being troublesome.

This makes her vulnerable to any type of counterattack. The same is the case with her three-hit combo. After completing it she will lose most of her stamina and you can do good damage to her. Moreover, don’t get carried away as she can also counterattack after some time. She has two unlockable moves out of which one is a long-range attack and the other close range.

The first one is when she jumps up high and then comes crashing down with her lightsaber. You can dodge this pretty easily by rolling sideways. In the second attack, she will rush in towards you and attack you at close range. Simply dodge backward to avoid this unlockable move.

Do bear in mind that if you try to remain far away most of the time she will use Force Pull or Force Push on you and attack you. The key skill you should use here is Leaping Slash because it has good DPS and can be thrown directly after she loses stamina. After some time when she has less than 70% health left phase 2 will begin.

Now once the second phase gas started she will use her double-bladed lightsaber which deals more damage than the previous lightsaber. She now has many new moves for both long and close range. In the long-range attack she will throw her lightsaber at you and if not dodged properly you can take decent damage. She also has four unlockable moves which are:

A ground Slam – In this attack, she will slam the ground sending a massive shockwave in all the directions. Simply jump when the shockwave arrives to avoid it.

A charge attack – As the name suggests it is a charged attack. She lowers her head and charges at you twice. You can dodge this by rolling backward.

A close-range overhand chop – She raises the lightsaber in her hand and chops you like sushi. Avoid this by rolling backward or sideways.

A spinning blade attack – She uses her blades and spins them in front of her and after a few seconds, she will leap them towards you. Dodge them by rolling sideways.

Just remember to counterattack always when her stamina runs out and use Leaping Slash as much as you can. Besides that the whole fight is a game of patience. If you wait and counterattack perfectly then the Ninth Sister will go down in no time.

If you are interested in learning more about the game then be sure to check out our guides on how to beat the legendary beasts in the game and where you can get stims.