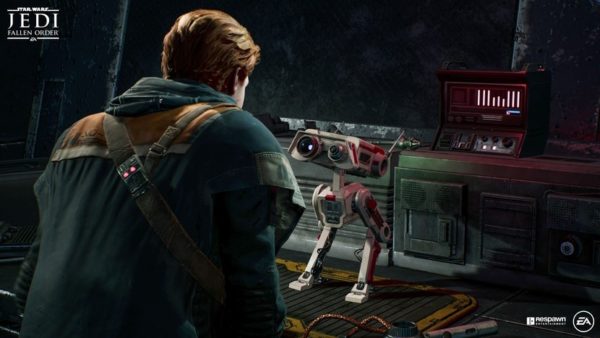 Cal in Star Wars Fallen Order has a lot of abilities which increases as the game progresses. One of the abilities which are very useful is hacking the droids on the enemy’s side and making them your own. Once they are on your side you can use them against the enemy. This guide will include all the details on how to hack droids in Star Wars Jedi Fallen Order and make the best use of them.

How to Hack Droids In Star Wars Jedi Fallen Order

The ability to hacking droids either security droids or simple probe ones can be acquired quite easily. After you successfully complete the Tomb of Miktrull on Zeffo and your BD-1 will unlock the ability. For both Probe droids and Security droids, you will have to head to different locations to unlock the ability to hack them. How to hack them is different too in a way. Without further ado here is the way to hack these droids:

Hacking Probe droids is relatively a lot easier than hacking security droids. To unlock the skill to hack the probe droids go to Zeffo and go to the Imperial Headquarters there. Once you reach the elevator that connects you directly to the Tomb of Miktrull you can see the place where you can unlock the skill.

Hacking these droids is a walk in the park actually. Just approach them by running to them or bringing them to you by using Force Pull. Once close enough wait for the prompt to arrive and when it comes press the D-Pad down and BD-1 will jump onto the droid and do its thing. The droid’s eye will turn blue and it will attack your enemies.

Hacking Security droids is hard and you might fail sometimes as well. To unlock the skill to hack the security droids go to the Imperial Refinery. Go to the Meditation circle here and take a right onto the path leading to a platform. As the platform might be spinning and you need to cross it simply slow it and cross it to get to the bench. Examine this workbench and the ability will be unlocked.

To hack a security droid first you need to take out almost 75% of the droid’s health and then simple approach it or pull it towards you. Press the button when prompted. BD-1 will come out and do its thing and the droid will be on your side.

The effect of the back doesn’t stay for long so keep that in mind when you carelessly move near them even if they are friendly. It may happen that you are focused on the enemy and the droids become enemy again.

That is all for our Star Wars Jedi Fallen Order droid hacking guide. If you are interested in learning more about the game then you can check out our guides on lightsaber upgrade locations and how you can get the double-sided lightsaber early in the game.