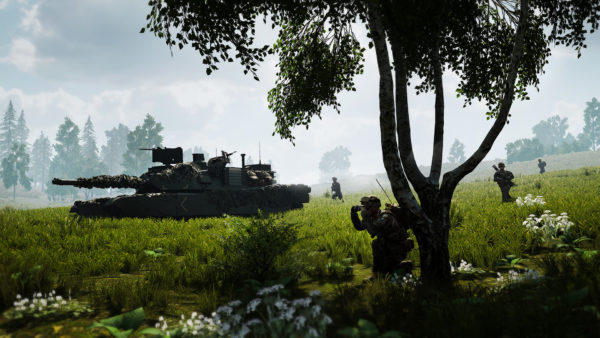 Squad is available on PC through early access and that’s why the game has a lot of issues like Black screen, crashes, game not responding and more.

The following are the fixes and workaround for Squad errors and issues so that you can play the game without any problem.

Squad is a tactical multiplayer FPS that emphasizes teamwork and tactics. The game is currently available on Steam through early access and user reviews are painting a bright picture for the game.

However, Squad is facing issues like black screen, crash at launch, low FPS on high-end systems and more. Here are some fixes and workarounds that might help you.

Bring a multiplayer game, players in Squad need tight coordination to win. But, some players are reporting that their mic isn’t working in the game. Here is a workaround for the mic issue in Squad.

Open Steam> friend list > settings and choose your mic. Now go to Windows mic settings and set it to 16 Hz low quality. Restart the game and your mic will be working while playing Squad.

Some players are experiencing an issue where they start the game the system doesn’t shift to the dedicated GPU, instead, Squad runs on Intel HD graphics.

The fix for this is simple, uninstall the GPU driver and reinstall it. If this doesn’t work then you just need to make sure the game uses the dedicated GPU. You can do it through the BIOS by disabling the Intel HD Graphics.

Remember that after this your system will only use your dedicated GPU regardless of the workload. For laptop users, this can cause the battery life to reduce.

Black Screen is a common issue in PC games and Squad is no exception. However, players are reporting that when they try to play the screen goes black and Task Manager shows the game isn’t responding.

For some, the game is taking some time to boot, wait for a while and it will start. If it doesn’t then try to the following fix for the black screen issue.

To fix this problem, open the game’s config file and change the resolution to your monitor’s native resolution and set the graphics to 1. Start the game and the issue will be resolved. You’ll find the config file here:

You need to make changes to the following

If you are experiencing the black screen issue where the screen goes black and you can hear the music, just press “Alt + Enter”. The game will go into windowed mode.

Go to the video settings and change the resolution to your monitor’s native resolution and you can play the game in fullscreen mode.

Some players are unable to change the game’s resolution as they can’t find it in the game. However, you can do it manually by making changes to the game’s config file.

Go to “C:\Users\[USERNAME]\AppData\Local\Squad\Saved\Config”. Open config fixe in notepad and change the following to your monitor’s native resolution if your monitor has a resolution of 1920×1080.

Save the changes and start the game and it should be running at the resolution you set in the file.

Performance is a common issue in PC games and Squad is no exception. Here are a few things that you can do to eliminate stuttering and possibly boost FPS.

Also, if you own at least a GTX 10 series GPU then open Nvidia Control Panel > Manage 3D Setting > Progam Setting > select Squad. Set Vertical sync to “Fast”. This will give you a noticeable FPS boost if you have the GPU and CPU to handle it.

Squad is facing issues like random crashes and for some, the game doesn’t even start as it crashes at launch. Here are a few fixes that will help you.

1- Go to “C:\Users\[USERNAME]\AppData\Local\Squad\Saved\config” and delete the config file here. Validate the game files and cache and start the game.

Here are the paths to the to exe files for which you need to make exceptions in your anti-virus software.

3- If the problem still isn’t fixed then run the game as administrator and the issue should resolve.

4-if you have overclocked your GPU then revert back to the GPU’s default clock speeds as it’s highly likely to cause crashes.

That’s all for Squad fixes and workarounds for errors like black screen, mic not working, and more. I will be updating these fixes as I find solutions to more errors.